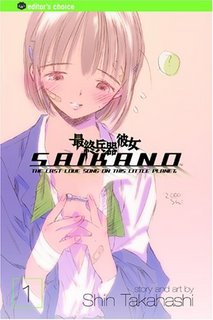 As part of Viz's premiere Editor's Choice line, I was expecting more of a striking tale. Instead, Saikano disappoints with bland characters and nothing very interesting in terms of story. Saikano follows shy girl Chise as she works up the nerve to tell Shuji that she would like to date him. He accepts the proposal and the two begin to eat lunch together and share a journal to write out what they're feeling. Shuji is quite blunt and constantly reproaches Chise for her actions and acceptance of particulars of her life. He doesn't seem capable of making up his mind on his feelings or what comes out of his mouth and is altogether an abrasive character that makes me wonder why Chise was drawn to him in the first place. Chise, on the other hand, is constantly apologizing for the things she does and the way she views things. She's a simpering character with the inability to stand up for herself, and as such, is quite loathsome. Instead of making me feel sorry for her situation, it makes me more angry that she's utterly incapable of developing a bcakbone. Ugh. Anyways, as the story proceeds, it is revealed that Chise is a living weapon and her body is capable of sprouting wings and discharging missiles, at the very least. The government owns her and she doesn't mind that fact, although she is terribly self-conscious about her mutilated body...as she should be. I don't much care for how the two characters handle this discovery, let alone how the two interact generally, in a sort of sado-masochist relationship. It just gets under my skin. The only thing that this series has going for it is its art. Shin Takashi's pencils are lovely. Pretty sparce, but lovely. My only complaint on that front is that he doesn't draw things pertinent to scenes, like when there were helicopters searching for the pair: Takahashi, instead of drawing helicopters, has the characters say there are helicopters and adds some sound effects for good measure. I'm not sure why the artist made this decision, but I found it distracting. I know a lot of people do like this book - I just couldn't. D

Monster (Volume 4)
Naoki Urasawa
This is one of the more higher quality manga that I am presently reading. Japan's Master of Suspense does a stellar job of creating tension and, well, suspense, with this mystery thriller. And each chapter seems to get better. Each volume builds upon the previous one, but they feel almost episodic, probably because of the sort of formula we've been seeing through the last few books, that of the good Doctor Tenma showing up in a town to track down Johan or a piece of the puzzle involved, getting involved in life-and-death situations, and then moving on. But each part really does add to the overlying plot, and makes our antagonist that much more monstrous. This volume in particular is a bit goofy - a neo-Nazi organization trying to mold Johan into the next Hitler? Yeah...silly. But it adds to a certain charm that the book has. Much of this volume focuses on several secondary characters that have been introduced into the book over the past few chapters, and many get to shine and become fully-realized characters that readers are invested in before they know it. Urasawa does just a masterful job on this series, earning the title attached to his name. A