August 29, 2006
Books coming out this week that may be of interest… 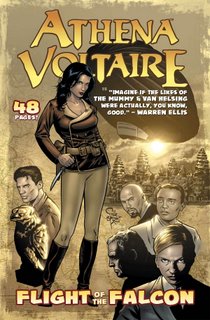 Athena Voltaire: Flight of the Falcon (Ape Edition) #1 - With Speakeasy’s fall, a really great comic disappeared from comic store shelves. Thankfully, Ape picked up this Athena Voltaire mini-series (from the creators of the hit web comic) and are offering the first two issues together in this Ape Edition. The first issue was truly amazing. This is one comic you don‘t want to miss out on. Don’t believe me? Check out the first 24 pages on-line for free!

Ultimate Spider-Man (Volume 16): Deadpool TP - The latest collection of Bendis and Bagley’s great superhero series has Spider-Man teaming up with the X-Men against Deadpool and his Reavers. I felt the latter half of the storyline wasn’t the best, but overall it was a good story.

Showcase Presents Batman (Volume 1) TP - Another showcase, this one featuring one of DC’s most beloved characters (if not the most beloved).

Nextwave: Agents of H.A.T.E. (Volume 1): This Is What They Want HC - Warren Ellis and Stuart Immonen’s series featuring a group of D-List superheroes is really fun and fresh. I’m not sure if it’s worth $20 for a hardcover edition, but it’s worth checking out at some point.

Book of Lost Souls TP - J. Michael Straczynski’s Marvel Icon series reads like a watered-down Sandman. It’s an alright story, but the only real reason to pick this up is for the art by the talented Colleen Doran.

Little Lulu Color Special - The best of the comedic Little Lulu is now being offered in color in this 200+ page paperback. If you haven’t checked out the trades thus far, this is a great place to start.