August 21, 2006
This is going to be a shorter Manga Monday than usual due to my recent vacation and the lack of reading I did while on it... 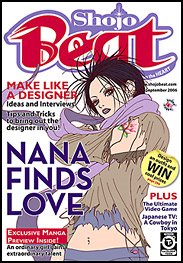 A preview of the new manga series La Corda d'Oro, soon to be released in the U.S., was included in the most recent issue of Shojo Beat. This may be the first book they've previewed that I'll actually buy. The book is about Seisou Academy, where the academy known for excellence is divided into two schools: one for music and one for general education. The music school in particular is known for turning out great talent. Pretty much anyone who enters into the musical competition they hold inherits fame and fortune. The two schools don't have much crossover, but that's about to change as the unsuspecting General Ed. student Kahoko Hino is about to be granted a gift from a well-meaning fairy, one who has looked over the school since she made a promise to the founder who saved her life years before the school ever opened. This story was really engrossing, despite its pretty silly premise. The art alone is reason enough to want to continue reading. A-

The latest installment of Nana put Nana Osaki pretty much in her former lover Ren Honjo's lap as she escorts Nana Komatsu to the Trapnest concert in her hometown. Full of all of the heartache and emotional ups and downs you're used to if you follow the story, this is one chapter of the book you can't miss. Relationships become more complicated than ever among Yazawa's masterful strokes. A

Since the debut of Vampire Knight, the series hasn't been all that interesting. I may give this one more chapter to hold my interest, but the book seems to retread too much territory each time in an attempt to draw out a paper-thin story. The characters aren't that interesting in the end and remain rather indisctinctive, despite a few who harbor traumatic backstories and find themselves in strange predicaments. In the end, Shojo Beat just has much higher quality art in other titles. D

Act 15 of Absolute Boyfriend - "The Use of Force" - really forces Night and Soshi into a confrontation for Riiko's affections. Not only are they on a desert island with the woman they both love, but they must attempt to overcome her complete disinterest in either men as she does her best to avoid any confrontations in such a compromising situation. Watase continues to make this love triangle very interesting several chapters into the title, and continues to keep outdoing herself. A-

This month also sees the last chapter of Kaze Hikaru to appear in the magazine, with the new Backstage Prince debuting next month!