August 25, 2006
Welcome to the third Double Take, where Patrick and I weigh in on a book together in classic Ebert & Roeper fashion. This week: another manga! This one will contain MAJOR SPOILERS, so proceed at your own risk. 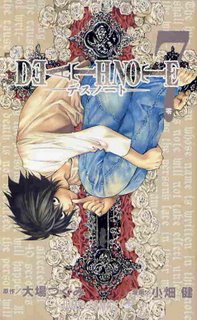 Dave says: I came onto this series a little late in the game, but man, I’ve loved the book since I picked up the first volume. If there’s any book out there with more action and thrills than Death Note, I would certainly like to know about it. This book embodies the term “page-turner.” In light of that, the series in general is very dependant on its plot. That’s not to say that the characters aren’t great, because they are. But with so much of the series hinging on actual events involved, it unfortunately makes it extremely difficult to discuss this book without tying events of the story to it. That being said, I’m going to talk specifically about things that occurred within the seventh volume of the series, assuming that anyone reading this post will have read it previously. So, spoilers will be prevalent. And they are huge spoilers because a lot of stuff goes down in this volume. Major things following up on the previous volume’s cliffhanger: Light Yagami reclaims the death note, as does Misa Amane, and through his diabolical plotting, Light forces the Shinigami Ren to kill L, and therefore kill herself, leaving the road ahead clear of obstructions to build his ideal world. That was a lot of stuff to go down, and not little stuff, but huge, world-altering moments, chapter after chapter. I think I found it more enjoyable when Light was Kira, so it’s nice to see that circumstance return, but I also enjoyed the dynamic between Light and L. With L out of the picture, the status quo is completely different and could have killed much of the series’ suspense, had the creators not had an equally intriguing story take its place. The final few chapters of this volume are the beginning of a new era for the series, as new opponents are set up to battle Kira, and make things difficult for Light’s plan of a Utopia free of criminals.

Patrick says: Well, yeah, this is great. We’re going to have to find a book that you and I disagree on to make this feature more interesting, Dave! In any case, for me, Death Note is probably the best mainstream comic being published right now…..the only other serious contender would be Dragon Head, I think, and the two are so different it’s almost impossible to compare. If I was forced at gunpoint to choose only one I could follow, though, I think I’d probably choose Death Note….it’s just a really, really fun series. Very well drawn, too, by Takeshi Obata, apparently also the artist of Hikaru No Go, a book I’ve not read but would like to. But you’re right…..aside from the pretty pictures, this book really does depend on plot twists and turns to hold readers’ interest…..the latest volumes have focused a bit more on characterization than previous volumes did, but it’s definitely a plot-driven book. This volume probably has the biggest shake-ups to the status quo, and that’s saying something. Probably my favorite volume of the series. The death of L was a huge shock, and really well-handled. I absolutely loved the look on Light’s face as he held the dying L in his arms, his evil sneer letting L know that Light was Kira, as L had suspected but been unable to prove. I wonder, did Light reveal himself out of cruelty, mocking L? Or, did he respect L enough that he felt he deserved to at least know the truth?

Other things I liked about this book: The new characters, Mello and Near….they seem like good successors to L, and a formidable match for Light, with the added twist that they are also going to be attempting to outwit each other. Another great moment was when Light recovered his memories of the death note….it was the moment we’d been waiting for, and I also liked how it was depicted graphically, with a collage of moments we’d seen before in the series. A nice touch.

Boy, I feel like this review is really only for people who are already fans of the series, so I maybe don’t know what the point of writing it was? We really didn’t explain the premise of the series, but this many volumes in, I certainly don’t have the interest or energy to recap the story so far for newbies. I guess I hope people just pick up on our enthusiasm and go check the book out for themselves. Or maybe people who dropped the series after the last major shift in status quo will be interested to know that Light has retrieved his memories and will want to start following the series again. I guess I’d be happy if this rambling nonsense caused even one more person to check out this series, because if you like mainstream genre comics, it really doesn’t get much better than this. A great series.

Dave says: Yeah, it’s kind of hard to review a book like this, but there it is. I also wanted to mention how some characters were very suddenly just written out of the comic and killed off, like Wedi and Aiber. It made sense to kill off the Yotsuba Group, since their arc was kind of over. Wedi and Aiber were just introduced recently and just like that, they were gone with the book’s most recent shift. That’s cool about Death Note though. Nobody’s safe. We never did find out what happened to the girlfriend of that FBI agent from the second book, and she was dropped just as quickly.