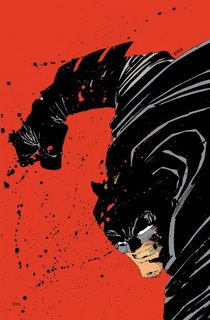 Absolute Dark Knight HC - Frank Miller's groundbreaking Dark Knight books get the DC Absolute treatment. For $100, you get The Dark Knight Returns and The Dark Knight Strikes Again in oversized volumes in a beautiful slipcase with a new introduction by Miller himself, as well as plenty of other bonus material like excerpts from the original plot and sketchbook material.

Death Note (Volume 7) - Beware of spoilers for this volume of the popular manga. Best to pick it up ASAP.

Heroes For Hire #1 - Spinning out of Civil War, Marvel introduces a group of heroes who band together to track down fugitives who have refused to abide by the Superhero Registration Act. Included on the team are Misty Knight, Colleen Wing, Shang-Chi, Black Cat, Paladin and the new Tarantula.