August 17, 2006
Welcome to the second Double Take! Every Thursday, Patrick and I will weigh in on a book here on Comics-and-More. This week, we take a look at the latest collection from Jaime Hernandez. 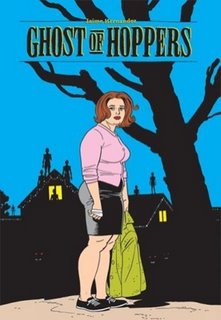 Patrick says:
Let me say this right up front: Jaime Hernandez is my favorite living cartoonist, and this book is one of his finest achievements. This slim graphic novel depicts the latest chapter in the life of Maggie Chascarillo, longtime star of Jaime’s (and brother Gilbert’s) Love and Rockets series of comic books. Maggie first appeared as a slim teenage girl smack dab in the middle of post-punk Los Angeles. Over the years, and the course of several comic books and graphic novels, Maggie has grown up, and this book finds her coming to terms with middle age. She is now the manager of an apartment building filled with eccentric tenants, she no longer lives in the ghetto known as Hoppers where many of her youthful adventures took place, and her relationship with sometimes girlfriend Hopey is……well, as complicated as ever.

I first read these stories as serialized installments in the second volume of Love and Rockets over several years, but it was great to revisit them collected under two covers. All of the themes of the story become apparent, and it is a much richer reading experience. Every line in this book is perfect, and when I say line, I’m not only talking about the dialogue (although that is perfect too), I mean literally every drawn line is perfectly, masterfully placed on the page to evoke just the right amount of humor, horror, heartbreak, or whatever combination of these is appropriate to the scene. To read Ghost of Hoppers is to experience the work of a true master of cartooning. Jaime is an amazing writer and an extraordinary artist, but more than that, he is able to blend these skills in such a way that every page, every panel, every moment rings true, and almost buzzes with the exuberant energy of pure, expert cartooning. Jaime’s best work is like the Platonic Ideal of cartooning to me. Did I mention I really, really liked this book?

What more can I say? I loved the way in which the supernatural elements crept in around the edges of the story. The final chapter…..my god, the final chapter……this chapter alone is one of the finest examples of comics storytelling I have ever come across. Simply amazing. The last page is perfect……some of the best Hopey and Maggie moments happen in this novel, which is so cool considering how long Hernandez has been working with these characters. Hernandez is as good now as he has ever been, and he may be better now than he has ever been. I doubt I’ll read a better book this year.

I’d like to add, too, that even though this is only the latest chapter in what is arguably one huge graphic novel spread across many smaller books, I think it actually works quite well as a first exposure to the artist and his work. Although the tale concerns an aging Maggie looking back on her life and events only longtime fans will remember experiencing with her, the point at which Maggie finds herself as she pines for her lost youth even as she feels unable to escape it, is one which should have universal significance for most human beings.

I can’t think of anything I didn’t love about this book. Please read it.

Dave says:
Unlike Patrick, I haven’t read much of Jaime Hernandez’ stuff. I have read his brother Gilbert’s work through their Love & Rockets series and he has fast become one of my favorite artists. I have tried Jaime in the past, specifically Flies on the Ceiling, and wasn’t compelled to read more. Ghost of Hoppers looked interesting enough on top of Patrick’s raving reviews of the book, so I thought this would make for a good stab at Jaime’s world once more. And…I really enjoyed it. I didn’t find it as flawless as Patrick did, but it was a really good book.

First off, Jaime’s pencils are gorgeous. That’s what drew me to this particular book in the first place: that awesome cover. All throughout the book, I have to agree with Patrick that the art is second to none. Where Gilbert overshadows his brother, however, is the storytelling. While this was a great story, depicting many wonderful characters in crazy situations or emotional moments, it just didn’t get me as excited as Gilbert’s work does. I did really like it, but it wasn’t as compelling for whatever reason.

Maggie is a fantastic character. Especially at the point of her life where she finds herself in this volume, reflecting over her life in middle age. Her predicament is made all the more apparent as she hangs out with a young woman, Vivian, who works a bikini and oversized card like nobody’s business, and attracts trouble with as much vigor. Maggie feels inadequate next to the people she finds herself among, and wonders, like many do, if she is an average, boring person, after all. Beyond Maggie, however, there weren’t many standout characters when you compare this to Gilbert’s works. I liked Vivian and the extremely eccentric Isabel, but I only loved Maggie.

The thing that really worked the best for me in this book was how everything felt really realistic. The situations, how people reacted to things, seemed more life-like than anything I’ve ever experienced in comics, whether it was someone caught up in their own thoughts or something less typical like a stalker waving a knife in a woman’s face. And in light of that realistic world (and realistic eccentricities of the characters therein), the supernatural elements that creep around on the periphery of the book are that much more effectively scary. Many visuals were very disturbing, yet things seemed to make a certain sort of sense when it came to the supernatural elements even though I can’t explain it outright. I don’t think they would have come together as neatly if I hadn’t read Flies on the Ceiling, however, since many of the symbols that appear in that supernatural story resurface here. That goes the same for other references of the book. I agree with Patrick that this is a good introduction to Jaime’s work, but I did feel I missed out on a lot, particularly in a scene that mentions Speedy (since I know The Death of Speedy was an important arc for his characters). As the final chapter begins to forego linear storytelling, the emotion behind the story is brought to a head and the genius behind the work is exposed, especially in the final scene.

One element that I think Jaime has over his brother when it comes to his mode of storytelling is that I could imagine having read this story in a serialized comic book, while Gilbert's works, I imagine, would be nearly impossible. The reason for this is that the story is smaller, focusing on one character and her situation. Gilbert's works tend to jump from character to character with several plot threads that make it impossible to keep track of in short installments. The cast alone is hard enough to keep straight. There are some exceptions of course, but in terms of Ghost of Hoppers and what I recall of Flies on the Ceiling, they're scaled back enough to be more accessible in whatever format the reader chooses to experience the stories in. Although when all's said and done, I believe that the ideal way to read these books is once they have been collected anyway (like Patrick said, themes become apparent, etc).

So, overall, I loved the art, the dialogue and realism of this book, but some of the elements of storytelling and characters didn’t do it for me to the degree that they do when Jaime’s brother Gilbert weaves a story. The Brothers’ works certainly compliment each other and are of the same caliber, but I still prefer the latter. In the end, however, Jaime’s only real fault is being serialized in the same book as a very talented brother. On its own, Ghost of Hoppers is a thoughtful, multi-layered, wonderful work.