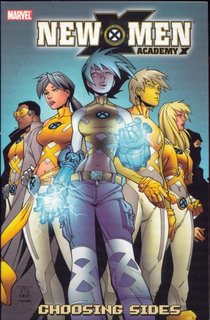 I've been meaning to get around to this book for awhile now. It just seemed like a fun superhero comic. And it is. This first volume follows a group of students at the Xavier Institute For Higher Learning, many whom appear in the previous comic series New Mutants, where Danielle Moonstar recruits students for the school. This is a sequel of sorts as it follows those students, with some new additions, as they are guided by Moonstar, Emma Frost and Cyclops. The specific group of characters that are followed here are put into a group together as they learn to cooperate and control their powers, and build rivalries with other groups of students, including Emma's group The Hellions. This volume mostly focuses on the interaction of the students with each other and is pretty sparce on the action, though there are some pretty nice fight scenes. There are some pretty cheesy moments in the book, and seems to be geared to an all-around younger audience than other X-titles. Nothing wrong with that, but it feels a little dumbed-down in some respects in light of that fact. The character designs are well done (I particularly like the look of Hellion Mercury) and there's some really nice art within. The little time I spent with these characters made me want to come back to the book to spend more time with them - definitely a positive. And like I said before, it's just an all-around fun superhero book. B