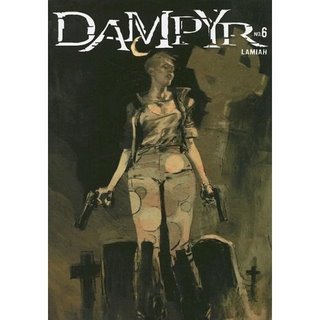 I got a little behind on collecting the European hit comic series Dampyr from IDW Publishing. When the title suddenly was no longer solicited in Previews, and I eventually read in an IDW forum that the series was, indeed, not going to continue being collected in the U.S. through them, I think I lost enthusiasm to finish tracking down the remaining collections. I picked this volume up at the Chicago Wizard World convention for half off, and it just reinvigorated my enthusiasm for the project. This is a really great series and I'm extremely pleased with IDW for exposing me to it. It's too bad that sales didn't justify publishing more volumes, but at least we got eight (for now).

Dampyr follows Harlan, a half-human, half-vampire whose blood is deadly to vampires. As Harlan goes on a quest to track down several master vampires, including his own father, he kills vampires, ghosts and various demons where they wreak havoc. In this particular volume, Harlan makes his way to Berlin, where a vampire is making her presence known through a series of extremely brutal, attention-raising attacks. This vampire, Lamiah, seeks revenge on a heinous crime committed against her by vampire master Shrek, and Harlan soon realizes that he has his hands full with the two warring masters. Tessa, a reformed vampire who's aided Harlan in the past, has her own objectives in Berlin, her hometown, and makes some hard choices as ghosts from the past pop back into her life. The opening scene of this volume reminded me of a scene I saw in a Dario Argento film recently - I believe it was Inferno, as a man runs from a shadowy figure amid ancient monuments and statues, stumbling, crying out for help... Dampyr has its cliches, sure, but overall, it's a really suspenseful, exciting series to follow, with some truly frightening moments, inventive storylines, and some great, tortured characters. Fans of genre work, I think, will fall hard for the series. Like I did. Don't let the fact that it's not continuing discourage you from picking up the few volumes in print in America. They're definitely worth seeking out. A