August 30, 2006
Welcome once more to Pat and Dave’s Double Take, where we each weigh in on…well, usually on a specific comic. This week, however, we’re going to be going through the new Previews catalogue (for books coming out in November) to comment on various solicitations. Enjoy!

Dave: I already commented on Marvel’s solicits on-line, so the Marvel section is primarily going to be Pat’s picks. 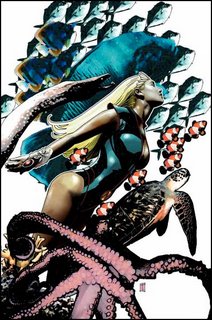 Dave: I love the cover to Agents of Atlas #4. I think I’ll check that comic out in trade format since I’ve been hearing good things about it and I really enjoyed Jeff Parker’s Interman.

Pat: Tom Spurgeon has a very nice interview with Jeff Parker up on his great site, The Comics Reporter.

I don’t read Incredible Hulk, but I really like Jose Ladronn’s covers. Oh god - a variant cover by Michael Turner? Who would buy a Michael Turner cover if they could have a cover by Ladronn?

I’m excited about the return of Hawkeye and the Scarlet Witch in New Avengers #26. And I see it’s drawn by Alex Maleev, so now I’m really excited about it!

Nice cover for Runaways #22. Looks like it’s focusing on Victor, which is good because he’s a cool character. I guess I may have to read Civil War: Young Avengers/Runaways after all.

I should note Astonishing X-Men #19 - the first part of Joss Whedon and John Cassaday’s final story arc: Unstoppable. I do hear occasional griping on-line about this comic book, but in my opinion, it’s been a consistently well-crafted superhero series, which is really all I ask of the X-Men.

I have a feeling Criminal is going to be a very good comic book.

One day I’ll get caught up on Powers trade paperbacks. 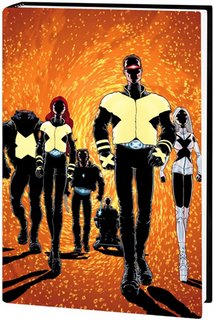 I’m also not going to buy the New X-Men Omnibus hardcover, collecting the entirety of Grant Morrison’s run on the series, only because I own all of the single issues and I am poor, but I hope a lot of people do pick this up because I can’t think of material more worthy to be included in the omnibus format. These are exceptional comic books. I would place them next to Frank Miller’s Daredevil and Stan Lee’s and Jack Kirby’s Fantastic Four in the pantheon of classic, essential mainstream superhero comics.

I’m definitely going to get Captain America and the Falcon: The Swine trade paperback. I’ve been enjoying these soft cover reprints of Jack Kirby’s 1970’s run on Captain America.

Dave: Okay, now for the rest of the catalogue…

Dave: I’ve been meaning to check out Sumarai: Heaven and Earth. And I will. Now the sequel is coming out from Ron Marz and Luke Ross and looks as beautiful as ever.

Dave: Yeah, I wasn't so impressed the debut issue of Morrison's run, but the second one convinced me that it needs to be a monthly purchase. 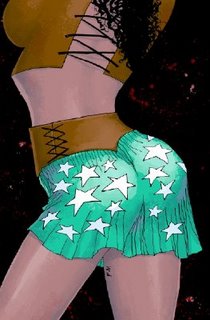 Pat: All-Star Batman and Robin the Boy Wonder #5 - This comic book is also great, but late! It has a drawing of Wonder Woman’s butt on the cover.

I read the first issue of 52 for free on-line. DC owes me twenty minutes.

I’ve recently started getting into the Bruce Timm animated DC cartoons again. And the comics based on them. Justice League Unlimited #27 looks pretty good.

I’ll wait until Grant Morrison’s and Jim Lee’s Wildcats is collected into a trade paperback.

Pat: Lots of beheadings in the Image solicits this month (The Tripper, Drain #1)

Pat: I want someone to buy me a Mr. Glum plushy!! 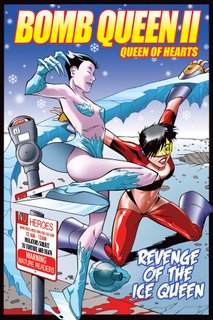 Dave: I think Bomb Queen is a really, really well-designed character. I don’t think I would ever buy the comic though…

Pat: I like the Ice Queen’s costume on that book too. It seems like it could be a fun comic book that doesn’t take itself too seriously.

I’m looking forward to Savage Dragon #131, as I look forward to every issue of Savage Dragon. This one looks like a direct follow-up to the recent She-Dragon one-shot. I’m glad to see Battle Axe in the regular series because I really liked Erik Larsen’s design sketches for her in the back of the She-Dragon one-shot. But I wasn’t as taken with She-Dragon artist Francesco’s depiction of the character. Also I really like Dark Dragon, so it should be a good issue.

Pat: I don’t know if these are reoffers, but people should buy Pizzeria Kamikaze by Etgar Keret and Asaf Hanuka and The Placebo Man by Tomer Hanuka because they collect really, really good comics from the brothers’ hopefully not defunct series, Bipolar.

Pat: Gargoyles #3 is a must-buy for me. This issue begins branching the story off into new areas beyond what has been seen in the cartoon. Good stuff.

Dave: I love the cover for Wonderland #3 - this is really a great series for all-ages.

Pat: Yeah, I’ve heard really good things about Wonderland. I like that cover too. I suppose I should read it.

Pat: Winsor McCay: The Editorial Works might be worth checking out, although I can’t say the things I’ve heard in regards to the quality of Checker’s reproduction of old comic strips fills me with much confidence that this material will be given the showcase it probably deserves. 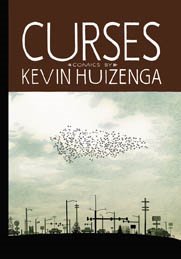 Pat: Curses by Kevin Huizenga is probably my pick of the catalogue. A collection of Huizenga’s anthology work and previously uncollected short pieces. Huizenga is a master cartoonist and this book looks like a lovely showcase for his talents. Definitely look for this one.

Lucky by Gabrielle Bell is probably also going to be really good.

Pat: Kan Takahama’s Kinderbook gets a new printing. I’ve been meaning to check this one out.

Pat: The Comics Journal is always worth reading. This issue features Gary Groths’ interview with Frank Thorne. Sounds good to me. 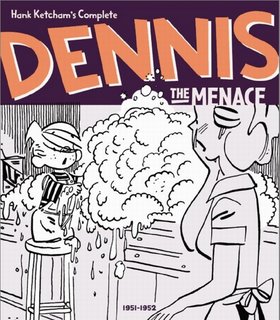 Hank Ketchum’s Complete Dennis the Menace 1955-1956 hardcover is the third in the Fantagraphics series. I haven’t read the second volume yet, but I will eventually. And I will eventually purchase this volume. There’s only so much time in the day, you know? It looks like you can also purchase the first two volumes as a boxed set similar to what they’ve done with The Complete Peanuts collections. This would be a nice way to enjoy the series.

The sixth volume of Mome features work by Lewis Trondheim. Just another reason to check out this great anthology.

Pat: I wish I could afford to buy The EC Archives books. One day they will be mine. One glorious day.

Pat: the best graphic novel of the year so far, Alison Bechdel’s Fun Home, is offered again to the direct market. Don’t miss out, literature-lovers!

Dave: The second Inverloch trade comes out this month. I really want to check out the first volume of the hit web comic. It looks cute.

Pat: All of the good manga is on one page! And it’s all part of Viz’s signature line. Please buy The Drifting Classroom Volume 3 by Kazuo Umezu, Golgo 13 Volume 6, and Naoki Urasawa’s Monster Volume 6. Thank you.

Pat: Strips, Toons & Bluesies: Essays in Comics and Culture - I hadn’t heard of this book, but Todd Hignite (editor of the excellent and recently-relaunched and reformatted Comic Art magazine) is one of the editors of this collection of comics scholarship. I likes me some good comics scholarship. Hopefully this will fall under that category. Worth looking out for.