August 24, 2006
Here are the Marvel books worth a look coming in November....Complete list at Comic Book Resources. 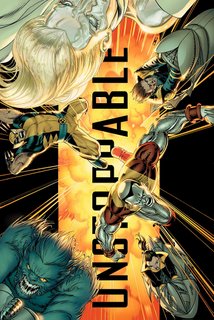 Astonishing X-Men #19 - Joss Whedon and John Cassaday's amazing run on the flagship X-Men title goes into its final run with the first issue of "Unstoppable."

Incredible Hulk #100 - Greg Pak brings the big green guy to a milestone issue. Full of reprints from Hulk's past, this issue will be a colossal 104-page beast!

Demons of Mercy #1 (of 6) - Riding on the success of the Halo Graphic Novel, Marvel will be launching a six-issue series based on the upcoming fighter game from the X-Box 360 game system.

New X-Men Omnibus HC - This is going to be a treasure. The entire Grant Morrison New X-Men in one deluxe over-sized hardcover volume. This bad boy will hold 1096 pages (41 issues) for $100. 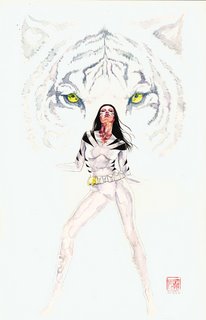 White Tiger #1 - New York Times best-selling fantasy author Tamora Pierce will bring the new White Tiger from the pages of Daredevil to her own solo series, with the help of Timothy Liebe and Phil Briones.

The Immortal Iron Fist #1 - Also spinning out of an appearance in Daredevil is Iron Fist. This series will feature art by David Aja, and will be written by none other than Ed Brubaker and Matt Faction.

Wisdom #1 (of 6) - If there's any one character from the X-universe who needed a MAX book (aside from Wolverine, that is), it would be Pete Wisdom. The bloody, sodding mutant will star in his own six-issue series, thanks to the minds of Paul Cornell and Trevor Hairsine, who will have him, among other things, murdering a bunch of fairies.

Captain America and The Falcon: The Swine TP - The third collection of Jack Kirby's Cap/Falcon series!