Sleeper: Out In the Cold 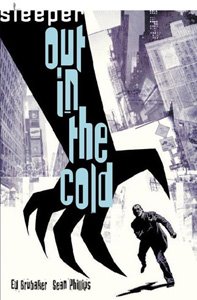 I figured that this would be a rather timely review, what with the same creative team's new book Criminal debuting from Marvel's Icon line in a few short months... This series brought a lot of attention to Ed Brubaker, and really served to put him on the map. Many fellow bloggers have been singing the books praises quite loudly, so I figured that it was about time to wipe the dust from the spine of the book that had been sitting on my bookshelf for over a year and give it a proper reading-through. And so it goes...

Sleeper tells the story of a superpowered sleeper agent deep undercover within a complicated hierarchy of villains pulling strings the world over. The only problem is that this agent, Holden Carver, has been cut off from the good guys he actually works for since his contact - the one man who knew of his true position - has slipped into a coma. As Carver stews in the position he's been left in, he falls deeper into the crime syndicate and ponders angrily over his predicament, struggling to walk a line he know longer has the intel to see as clearly as before.

This book includes some really interesting philosophical questions, particularly when it comes to doing what's right or wrong, given the way Carver's left to his own devices within a hornet's nest. But not everything can be boiled down so easily, as the cliche goes, to black and white. Carver experiences this for himself as he finds himself working alongside Tao, the mastermind behind the villainy, and the fascinating Miss Misery. The backstories of many of the tale's villains are especially interesting and demand plenty of sympathy from the readers for the predicaments these people found themselves in as children that paved the way for their future folly.

Following the first issue of the series, I'm not sure I would have been compelled to read any subsequent issues of Sleeper. It was pretty dull in comparison to many other genre works on the market. After finishing the entire first volume of the book, however, it stands as a well-crafted genre work. But not much more. It certainly hasn't lived up to the hype built around it, despite its great art and clever story and ideas. In the end, it's a superhero book shrouded in noir. Better than the average book starring men with healing factors and capes, but not exactly the second coming that some have professed it to be. B