August 14, 2006
Welcome to another installment of Manga Monday! But manga isn't just for Mondays here at Comics-and-More. In case you missed it, the first of our weekly feature Double Take in which Patrick and I weigh in on a particular book, features Kazuo Umezu's The Drifting Classroom (Volume 1). Now, on to the reviews... 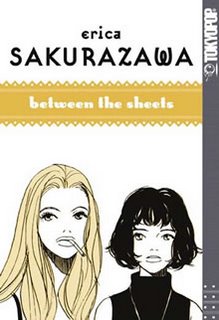 Between the Sheets
Erica Sakurazawa

This single volume story by Erica Sakurazawa is about two girls - best friends - and their forays into love. The beautiful Saki in particular is always in a relationship with one man or another. But what's interesting about this book is that at the beginning of the story, Minako realizes that she has developed feelings for Saki. She actually loves her. It's interesting to see how Minako handles this realization, the bitterness and jealousy, but also the tenderness and misplaced affection. It's pretty light, breezy reading. There's not much meat behind the story, but it's really delightful nonetheless. And Sukurazawa's pencils are just great, perfectly suited for the story as they are very elegant and soft. I really didn't have much sympathy for the protagonist of the story, Minako, as she was pining over someone who didn't (and couldn't) love her in return, and I find that distasteful generally. The fact that it's a woman she lusts for doesn't make it any more tragic to me. It's still an unadmirable quality. But it's not just Minako who's guilty of relying on relationships around her to make her "whole." All of the female characters that appear in the book are slaves to their yearnings. If anything, I find Saki to be a more interesting case just because with her, the notion of women seeking out mutual love is thrown out in favor of a woman who seeks reciprocal sexual gratification, a trait more often pinned on men. But that's just an aspect of the story the author chose that I didn't like. It's not really the writer's fault (especially a female writer) if she merely writes her characters with qualities she sees around her or reflected in society overall. Minako generally is a very misguided soul who does some really screwed-up stuff in light of an infatuation she doesn't know what to do about. It's an interesting character study of her, but overall, nothing to really propel Between the Sheets into a category beyond light, breezy reading. I did, however, like it enough to want to seek out more work by Erica Sakurazawa. B+ 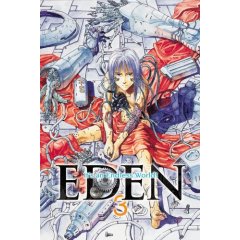 Hiroki Endo's art always strikes me as beautiful when I open up a volume of his work. Pencils just don't get much better than this. From cybernetic parts to action sequences to panels depicting wave after wave of gore, Endo is a master of his craft. That being said, the world he creates for us in light of the human plague that wiped out most of humanity, is pretty damn interesting too. This particular volume follows a small group of characters as they take on a military group that's after a piece of information that they have in their possession. It's a direct follow-up to the sequence of events from the last book, that of setting this volume-long battle up. And it's quite the battle. Amid the destruction and mayhem however, we are treated to flashbacks into the characters' pasts that fill in the blanks as to why characters react certain ways and how they ended up in their current situations. The author does a fine job of constructing an attachment between his audience and the characters he lovingly created with so much thought. But this book is also brutal. The last ten pages of this book are really beyond description and had me reeling. This really is a book more people should be following. A