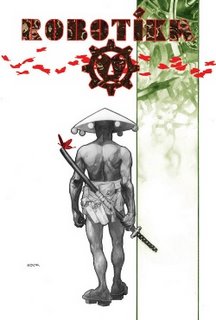 I finally got my hands on the final issue of Alex Sheikman's futuristic samurai adventure and this four issue mini-series is just oozing creativity. Sheikman's pencils are beautifully showcased in conjunction with stellar character designs, striking panel arrangements and riveting action. This is quite a unique comic book experience without equal. I'm going to be bold and say that the only creator that comes close to this sort of original storytelling experience in modern comics is the fast-paced craziness associated with Grant Morrison. Morrison's work may be more universally appealing, but I really admire the offbeat unconventional story offered here. And I really do have to give props to Joel Chua for his contribution on the title, that of the coloring. The vibrant colors working through an often lurid dreamlike world really complete the book. My only complaint I have on this title is that the characters didn't quite grab me. I didn't mind the vertical font that one character adopts as many readers did, and it's not even that the characters weren't fully realized - I just wasn't struck by them. They were a tad uninteresting to me. That small gripe aside, I think every title so far offered by Archaia Studios Press has been of superior quality. In my eyes, any title offered by them is worth checking out presently. Sheikman is presently working on a follow-up to this four issue series and the hardcover will be available in coming months. But be sure to give yourself a few issues to warm up to the title if you plan on scouring for back issues. Sheikman isn't afraid to throw his readers into his world and it can be a little disorienting. A-