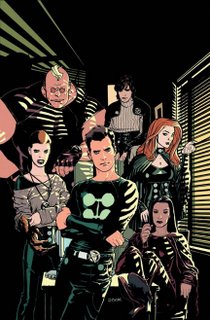 X-Factor: The Longest Night Premiere HC - Yes, it's $20, but this one's worth it. Peter David's X-Factor is one of the best debuts of the year.

Eden: It's An Endless World (Volume 4) - Man, I'm getting behind on this manga. The art by Hiroki Endo is awesome!

Creeper #1 (of 6) - Steve Niles does DC's The Creeper. A very appropriate match.

Agents of Atlas #1 (of 6) - I don't know much about this series, but I guess it revives a bunch of old characters from The Golden Age, when Marvel Comics wasn't yet Marvel, but Atlas Comics. Pre-Fantastic Four.

Exterminators: Bug Brothers TP - Bugs creep me out and this book is one big gross-out of bug guts and...injecting pesticide into your veins? Weird book.

It's off to Wizard World Chicago this coming weekend, so I may not be able to get in a post every day beginning Friday, but I'll for sure be back for Manga Monday!