Showing posts from December, 2005
Show all

In Passing...Bulleteer to Generation M 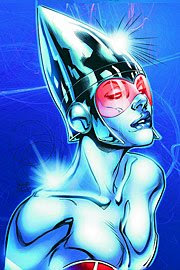 So I finally got a chance to catch up on my comic reading since the craziness of Christmas. Here are my mini-reviews for last week's comics... Seven Soldiers: Bulleteer #2 (of 4) - One of the best Seven Soldiers issues to date. In this issue, we get the answers to some burning questions from Seven Soldiers #0 , like what exactly happened to the heros in Arizona? What were the circumstances that brought them together? The answers involve racism and monsters. Just awesome. 9.4/10 The Book of Lost Souls #3 - J. Michael Straczynski and Colleen Doran's "Icon" book continues as our mystery man visits another soul content with destroying herself, this one being an artist whose boyfriend overdosed. I liked the issue, despite a nagging feeling that the writer was being a little pretentious. 7.1/10 Runaways #11 - The runaways continue their adventure in the Big Apple as they confront Spider-man, bluff drug pushers and are inevitably attacked by a certain superhe
Post a Comment
Read more

Another Christmas come and gone... 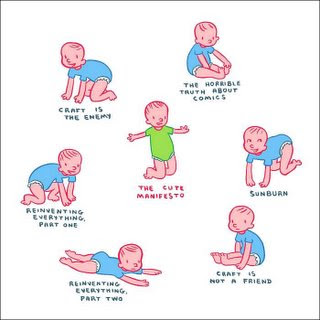 What I got for Christmas this year... Graphic novels/Trades : - The Cute Manifesto - Excaliber Classics (volume 1) - Catwoman: When In Rome Novels : - The Historian DVDs : - Anastasia - Closer - Open Water (I actually went to rent movies at my mom's and it was 20 cents more to buy it, so she just got it for me...) (I also watched War of the Worlds and Sideways on Xmas Eve) misc.: - lots of candy - a burned Xmas CD - chardonnay - a book light - a wallet - socks - DVD-Rom cases - utensils - money - lots of Barnes & Noble giftcards - a Target giftcard I already used part of my Target card on House of Flying Daggers the DVD and picked up Robotika #1 and Sword of Dracula #1 from Big Brain in Minneapolis (and food) with my money. And Patrick got... Graphic Novels/Trades : - Essential Spider-woman (volume 1) - DC Showcase Presents...JLA (volume 1) - Night Fisher - Bambi and Her Pink Gun - Hino Horror (volumes 1 and 2) - Marvel Masterworks: Fantastic Four (vo
Post a Comment
Read more 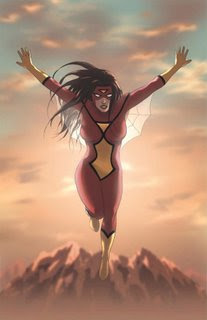 Like most people around this time of year, I've been busy at work and shopping for presents, so I haven't been updating as often as I wish I could. I'll be going home for Christmas for a few days starting tomorrow as well, so I won't have time to read comics, let alone discuss them, but I promise to be more consistent when I return. Yesterday, a UPS truck broke down on its way to Wisconsin, so no Wisconsin comic stores received their shipments until today, which was annoying enough, but hey, I got them and that's what counts, right? (well, all but Grimoire #7 and Mome , but that's the local store's fault for not ordering enough) But anyways, I did have time to read a comic before I resume packing and head in to my last day at work before having a five day stretch off... Spider-woman: Origin #1 , written by Brian Michael Bendis and Brian Reed, with art by the Luna Brothers (favorites of mine)! The rise of Jessica Drew... This issue was pretty basic, l
Post a Comment
Read more 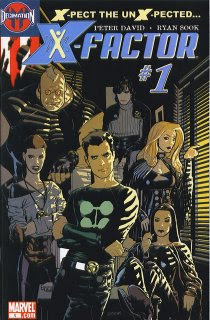 The debut issue of another X-Factor series launched this past week, from the minds of Peter David and Ryan Sook. If you recall, a few years ago Peter David wrote a Marvel Knights mini-series called Madrox , about the Multiple Man who we see in this new series leading a band of detective/heroes through his X-Factor Detective Agency. The new X-Factor is a sequel of sorts to this story, including the likes of Strong Guy and Wolfsbane, who were seen in that initial mini, as well as bringing in some fresh blood in the forms of Siryn, Rictor and M (who did not appear in this first issue, although she was mentioned). Madrox's relationship to his clones was explored in that mini-series, including the idea of him sending clones out over the world and reabsorbing them (and the information they gained), as well as his lack of control over the personalities and actions of the clones he produces. This interesting idea is picked up in the new series, indeed almost immediately, as Madrox confr
Post a Comment
Read more

In Passing...DMZ to Secret War 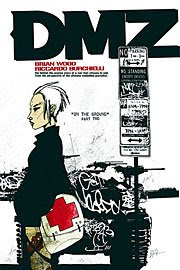 Fables #44 - Part three of the "Arabian Nights (And Days)" storyline deals with the repercusions of Sinbad's friend, Yusuf, letting the djinn out of the bottle last issue, as the conflict is diffused in an unexpected way thanks to some astute Fabletown citizens. 8.5/10 Secret War #5 (of 5) - This has been a pretty lacklustre series. The art, painted by one Gabriele Dell'Otto, is great, but that's about all it's had going for it. This issue is all about the explanations, which were nothing that warranted this series to have been conceived of in the first place. 2.8/10 DMZ #2 - Intern Matthew Roth explores a dangerous "war zone" city with Zee, who keeps him alive long enough to talk him into carrying out his news crew's assignment and report on what really goes on in the DMZ. 6.4/10 And from the pages of Shojo Beat (Volume 2, Issue 1)... Nana - Nana attempts to find bandmates for her roomie as she realizes she's been acting unfair t
Post a Comment
Read more

In Passing...Spider-man to Mr. Miracle

December 14, 2005
Ultimate Spider-man #87 - Despite the disappointing "cool down" issue of the previous Ultimate Spider-man story arc "Warriors," Bendis has been on top of his game lately with the old Webhead. This new arc "Silver Sable" is just plain awesome (and not just because I'm partial to the obscure mercenary!) The Wild Pack mistakenly kidnaps Flash Thompson, thinking he's the man behind Spidey, while Mary Jane is completely jealous after seeing Peter with Kitty. Ayeyay. The high school soap opera, as always, is just as interesting and suspenseful as the heroics. 9.5/10 Necromancer #3 - What started out as a very promising series falls quickly into a silly "girl using magic" comic with this issue, as a mentor figure arrives out of nowhere to save Abigail from the clutches of...government officials in league with demons? Ugh. The only Top Cow book I've ever liked has just become another Top Cow book I'll never read. 4.8/10 New
Post a Comment
Read more 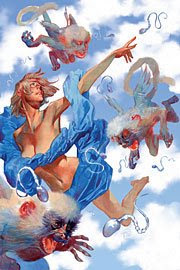 Brian K. Vaughan's Y-the Last Man #40 is another stand-alone issue focusing on secondary characters of the series. And is it just me or do the stand-alones seem to be better than the on-going plot ? This series has gotten pretty silly as it's progressed, but there are still a few decent things happening beyond all of the crap. This particular issue is kind of a follow-up on events from a while back, where Yorick meets a woman named Beth (not his girlfriend Beth, but another one) who is hiding out in a church. Finally, we get the answer to questions brought up at that time - about what has become of the catholic church since the plague struck. It was a little disappointing, as they're merely searching the world for miraculaous conceptions. A little desparate, I guess. We also get to find out what little secret Beth's been hiding since Yorick took leave of her - particularly the little bun in her oven (did anyone out there believe that that wasn't going to happen
Post a Comment
Read more

My Favorite CDs of the Year 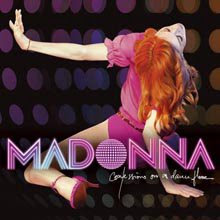 1. Confessions on a Dance Floor - Madonna Key Tracks: Hung Up, Sorry, How High, Push 2. Bleed Like Me ~ Garbage Key Tracks: Why Do You Love Me, Metal Heart, Boys Wanna Fight, Why Don't You Come Over 3. Plans ~ Death Cab for Cutie Key Tracks: Marching Bands of Manhatten, Summer Skin, Your Heart Is an Empty Room, Crooked Teeth
Post a Comment
Read more 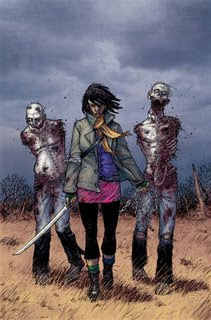 The fourth collection of Robert Kirkman's zombie saga, The Walking Dead collects issues 19 - 24 of the ongoing series, this story entitled "The Heart's Desire." But if you're looking for zombies this time around, you're going to be hard-pressed. Aside from the opening scene where another character joins the small group, there is little zombie action, but instead focuses on the delicate relationships between the existing characters within the safety of the prison they stumbled upon with the last collection. The new character that joins the group, Michonne, makes her debut slicing and dicing the zombies with a sword like a swashbuckling superhero, two zombies in tow without arms or jaws to render them incapable of attack. An unsettling appearance, but thus is the world left for the ones who have survived. There's an over-the-top speech given at the end of the volume that causes one (or maybe just me) to roll their eyes, but other than that, it was good clea
Post a Comment
Read more

In Passing...Fell to Kitty Pryde 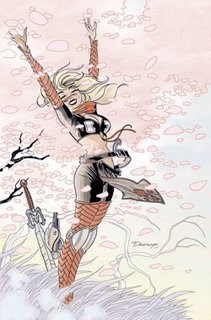 Fell #3 - Another self-contained issue of Warren Ellis and Ben Templesmith's noir series came out this past week, with our favorite law enforcer caught in the sights of a suicide bomber. I didn't like this issue as much as the first two issues of the series. I just thought it was a little dull in comparison without any real detective work and just a lack of action overall. Ellis showcased the quirkiness of Snowtown once again via a stroll through the street, where we saw a couple of shady figures, including the always-present nun wearing a Richard Nixon mask. 5.4/10 New Avengers #13 (spoilers) - The Silver Samurai confronts the Avengers and Ronin's true identity is revealed as Echo. Now, Echo as Ronin? Thirteen issues of being on the cover and then she decides to stay in Japan at the end and not be with the Avengers. Marvel needs to settle down with the cover campaigns as usual, instead of jumping the gun. The reveal was a big letdown, as anyone who hasn't read Dare
Post a Comment
Read more 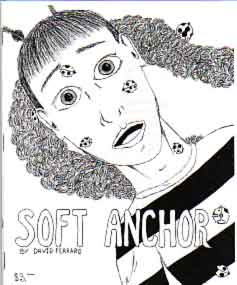 My autobiographical comic (mini comic) Soft Anchor is now available at Quimby's . The first issue is about events in my life that took place when I was seven years old. I grew up in an abusive household and my first real sexual experience with a neighbor boy take place during this year. I sent a preview copy to the store, so they should be posting a review sometime in the near future, and I will be sending copies to other stores as well, so be on the lookout if you don't want to pay for shipping! The first issue is entitled "Not a Ladybug." I'm presently working on the second issue which I have no name for as of yet.
Post a Comment
Read more

December 01, 2005
I actually kept my New Year's resolution this year. Since graduating with my English BA degree, I haven't read much in terms of novels. Last year, I read only three books the entire year. Which was totally pathetic, having had to read two or three books a month in college. So, my New Year's resolution for this year was to read at least one novel a month. And I did. January: Mansfield Park ~ Jane Austin February: The Folding Star ~ Alan Hollinghurst March: Northanger Abbey ~ Jane Austin April: From Hell ~ Alan Moore/Eddie Campbell May: Pride and Prejudice ~ Jane Austin June: Little Women ~ Louisa May Alcott July: Persuasion ~ Jane Austin August: The Mysteries of Udolpho ~ Ann Radcliffe September: Mysterious Skin ~ Scott Heim October: The Diary of a Teenage Girl ~ Phoebe Gloeckner November: Madame Bovary ~ Gustave Flaubert December: Harry Potter and the Sorcerer's Stone ~ J.K. Rowling Obviously I finished my December book well ahead of schedule, so i
Post a Comment
Read more
More posts