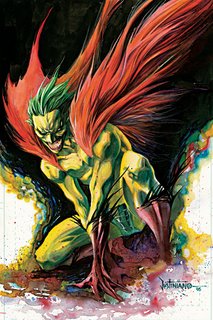 I'm not very familiar with DC's Creeper (just like I'm not too familiar with the DC Universe in general). This title caught my eye because The Creeper is such a freaky visual, and also because Steve Niles, sort of the American Master of Horror Comics, is writing it. This particular issue is the origin story of the new Creeper, who comes to us in the form of Jack Ryder, an asshole of a talkshow host who has a knack for finding, if not causing, trouble. He gets a little over his head this time around as he is transformed into this ghoulish, unsettling hero. I won't go into particulars, but the origin is fairly interesting. It's brutal, then a little scary, then a bit goofy. But it's a damn fun issue overall. I wasn't really sure of Justiniano's pencils at first, but as the story progressed, I kind of thought that they were pretty well-suited for the title. Justiniano also did that spectacular cover that forced me to pick up the issue in the first place, so I have to give him props. This mini-series is six issues long and I would recommend getting on board for the crazy thrill ride. B+