In Passing...Mouse Guard to Uncanny X-Men 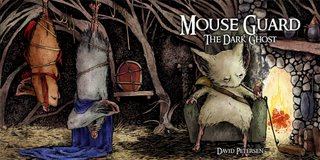 Mouse Guard #4 (of 6) - I had to order the first issue of this comic on-line because my local store didn't have it. They had a copy of the second issue, a few of number three...now for issue four, there were dozens of copies. It kind of annoys me that they jumped on the bandwagon so far into the series. I would have been aware enough to have ordered several copies immediately - isn't that kind of their job? Grrr. Anyways...This chapter of Mouse Guard entitled "The Dark Ghost" picks up on events from the previous book, as the Mouse Guard confront new enemies...and make new allies. As beautiful as ever. A

Ultimate Spider-Man #98 - "The Clone Saga" continues and it is quite good. I hope Bagley and Bendis stay on this title for a long while to come - it's just great knowing that you can look forward to this much consistent quality in a superhero book. A

Uncanny X-Men #477 - This was an interesting chapter of "The Rise and Fall of the Shi'ar Empire." We left the X-Men drifting in space previously, and this stretches the suspense a bit longer, as the X-Men don't even appear in the book except in flashbacks. Vulcan is examined here, as the reasons for his actions are made clear and we get to see what he's been up to. Interesting and a tad disgusting. A-