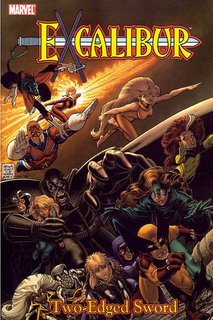 The second volume of Excalibur Classic, "Two-Edged Sword," reprints #6-11 of the original series and the Mojo Mayhem special. Alan Davis is the primary artist, with a couple of fill-ins from Ron Lim and Marshall Rogers. Mojo Mayhem was illustrated by Arthur Adams. Despite the fill-in issues, I don't think they were too distracting or really interrupted the flow of stories. Alan Davis was the first artist that I actually recognized, having grown up on Excalibur, so I may have noticed the shift in art more than others, but it was fine in the end. I particularly loved the art in the first two issues of the collection that tied in to Inferno. Lots of demons and organic buildings and such to make Davis' pencils stand out as all the more brilliant. The subsequent issues begin to delve into doppelgangers of the team, something that the book is probably very well-known for as there were dozens of stories with alternate Kittys and Brians. The storytelling isn't as sharp in this book as in the first collection, but we do get to see some familiar, loving concepts introduced to the series, like W.H.O. (Weird Happenings Organization) and Allistaire Stuart (whom Kitty adores, and who adores Rachel). I remember really loving the Mojo Mayhem special when I was younger, and it's still pretty good. Not exactly Shakespeare or anything, but it was a fun, silly adventure featuring the X-Babies (and I have to say I really like Baby Wolvie). Now Meggan has always been one of my favorite characters in the Marvel Universe, and she's already getting really interesting in the series. She's a little more in the background, a little more subdued than the others, but her powers and how she reacts to things is really just expertly executed. I hate that these Classics are so expensive. $25 for about 200 pages. It's presented beautifully, but I still have to hesitate on some purchases. I probably won't get the next New Mutants Classic for that reason. But I'll be getting future Excalibur volumes no matter what... A-