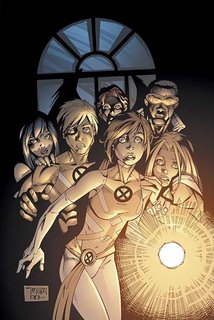 The second volume of New X-Men: Academy X follows the New Mutants squad of students at the Xavier Institute for Higher Learning through two stories, collecting issues 7 - 11 of the ongoing title. The first story contained within is "Haunted," where strange happenings occur at the school as Prodigy's younger sister comes for a visit. The two issue story that follows is "Too Much Information," about Prodigy's decision whether or not to keep the mental block that causes the knowledge he absorbs from those nearby to fade, or whether he should retain said information. On the whole, this is a much weaker volume than the previous one. I was actually surprised by such a significant dip in quality. The storytelling is very predictable and sloppy. "Haunted" read like a really bad young adult thriller. I don't mind that this title is written in a style more suited to a younger audience. Harry Potter is too and I love it, but there's no excuse for a story as badly written and contrived as this one. "Too Much Information" doesn't fare much better. The conclusion that the story builds toward is easily recognizeable early in the set-up stage and the rest feels like filler that you have to patiently wade through to get to that scene. It's been done before. It's been done much better. Despite my affection for these characters, if the storytelling on this title continues to stagnate, I'll be forced to drop this title and that would be a real shame as it shows so much promise with the strong cast and relationships built in the first storyline. All of that is all but swept aside, including the interesting rivalry with The Hellions that was such a focus of the first book, in favor of unimaginative stories. I'm praying this creative team sharpens up their game and got this drivel out of their system. D