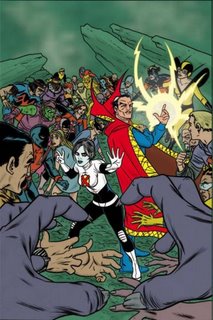 X-Statix Presents: Dead Girl TP - The most loveable character from Peter Milligan and Mike Allred's X-Force/X-Statix run gets her own mini-series collected into a paperback edition, co-starring Doctor Strange. It's a wild, goofy time and also, excellently executed.

Marvel Zombies HC - More dead characters from Marvel, this one featuring plenty of undead versions of Marvel icons. This collects the entire five-issue run of the popular title for $20.

Annihilation #1 (of 6) - It's Marvel's OTHER big crossover event of the summer. If you were clamouring for a big galactic superhero showdown event, you've got your wish. Four mini-series featuring different characters like Silver Surfer and Ronin culminate in this six issue mini-series cosmic event.

Martian Manhunter #1 (of 8) - I don't know much about this guy except from what I saw on Justice League Unlimited. I just felt bad having all Marvel titles on my list...