August 10, 2006
Prepare yourselves for another weekly feature at Comics-and-More! Patrick will be joining me every Thursday to weigh in on a particular book we've both read, ala Ebert & Roeper. We've decided to call this feature Double Take. 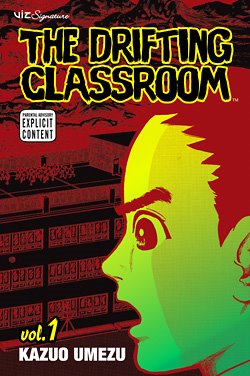 Dave says:
The first title up for discussion is the science fiction/horror manga from renowned creator Kazuo Umezu. This book follows sixth grader Sho as he goes to school one day and...the school disappears. Or rather, ends up somewhere else, not on this Earth. But leading up to said event, we get a look at Sho's life as it was, and he's really a boy who's not ready to give up his childhood in favor of academia at a time when children need to begin taking school seriously. In light of this conflict, Sho lashes out at his mother and classmates and on the morning of his departure for school, he has a big fight with his mother that eats away at him as the story progresses. It's interesting when the school disappears because the students and faculty don't understand what has happened, but as readers, we get to see the community left behind experience the event as well, so many of the possibilities that the school runs through we know are immediately wrong. In wake of the school appearing where it does, the book really begins getting crazy. Everything is done completely over-the-top and ridiculously. But it's fun in a campy sort of way to see teachers smacking children to keep them from leaving school grounds and such. Not only that, but events are stretched out dramatically and any hint of blood is turned into an excuse for a blood bath. It's great fun and the mystery behind it all is intriguing.


Patrick Says:
I really enjoyed reading this book. The premise is fantastic, and this first volume was just a blast to read. I think pretty much every line of dialogue was screamed. Tears gush down faces in torrents, blood spurts and oozes, young children are slapped by teachers trying to maintain order in a desperate situation. David is right that there is definitely a lot of camp appeal here…..I’m not sure I was supposed to be amused or horrified when the teachers would slap the kids upside the head, but I found myself laughing out loud more than once. Still, I’d like to think I was laughing with the book rather than at it. It’s clear that author Kazuo Umezu is having a blast with this series, and the fact that Mr. Umezu is also well known for his humor work makes me think at least some of the laughs are probably intentional. The enjoyment I had reading this book was similar to that of another comic book I’m following, Frank Miller’s and Jim Lee’s All-Star Batman and Robin the Boy Wonder. In both books, I don’t think the creators are so much making fun of the respective genres in which they are working as they are unafraid to embrace the more outrageous aspects of said genres, all in the service of having a hell of a good time. That’s kind of the approach I think should be taken to mainstream genre comics in general, and it certainly works well in these two examples, at least in my opinion.

I don’t want people to think this only works as camp, though. Umezu is an expert cartoonist. His drawings of children are particularly appealing and evocative of the larger than life emotions the characters are experiencing. There is a real sense of urgency and rapid movement to the line work here, and I think it will cause most readers to turn the pages very quickly while still feeling as though they’ve gotten a dense reading experience. That’s how I felt, anyway. I found myself genuinely caring about the characters and wanting to know what happens next. While the horror is not as expertly handled as in a book like Dragon Head, there is a genuine creepiness to the proceedings, I think arising mostly from the fact that you sense these doe-eyed youngsters are in real, physical jeopardy.

I also appreciated the concise author biography and selected bibliography in the back of the book, compiled by Patrick Macias. It helps to put this and other works by Umezu in perspective, and I’d love to see more of this kind of thing show up in translated manga. I’d love to see more older and historically significant manga translated generally, in fact. In any case, The Drifting Classroom is a fine addition to the mostly excellent Viz Signature line of titles, and I can’t wait to read the next volume. Highly recommended to fans of fun, scary comics.

Dave says:
It definitely was one of those books you find yourself reading very quickly, and some might say "can't put down." The art also reminded me quite a bit of Toru Yamazaki's pencils on Octopus Girl, and I would be very surprised if Yamazaki wasn't greatly influenced by Umezu, especially since Yamazaki also has that over-the-top flavor to his work. It was a little strange to read The Drifting Classroom in that it's a story starring elementary school kids with so much violence and gore, but it really worked and it added a sort of chaotic energy to the book that just wouldn't have been present if the author had chosen to use older children instead.

Patrick says:
I agree with those comments.....Kazuo Umezu is usually written about as being a very popular and influential artist, so I'm sure you're right about the Yamazaki work, although I've not read Octopus Girl myself. I like what you say about the "chaotic energy" and wish I'd thought of the phrase....it is interesting how the children themselves become one of the "horrific" elements of the story....I'm thinking specifically of the scene where they trample the female teacher, of course, but so much of the book is spent on the adults' efforts to keep this mob of kids under control, which puts the viewer in a strange place as far as who we are supposed to empathize with, you know? Also, I loved when they said something like "those third graders are going to be trouble," and of course the very next scene we see the third graders have tied up their teacher and they are looking out the window with these evil expressions....and the first graders, who I don't think we ever see, are supposedly unaware of what is happening and constantly singing their little songs....you're sort of afraid of them, you know? Man, this was a pretty great book. Great ending, too.