In Passing...Ms. Marvel to Devi 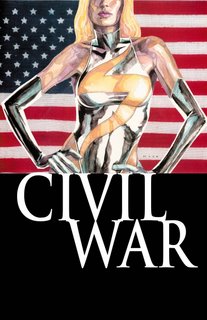 Ms. Marvel #6 - This issue of Ms. Marvel was awesome. It's the first Civil War tie-in of the title, and as such, featured some of Iron Man's Avengers, which included Ms. Marvel, Wonder Man, and Julia Carpenter, the black-costumed, red-haired Spider-Woman (or Arachne as she calls herself now to forego any confusion). So, we get to see the Avengers track down some unregistered heroes with lots of ass-kicking and internal conflict. Julia Carpenter made herself a stand-out character here. A

Ultimate Spider-Man Annual #2 - Spider-Man butts heads with Daredevil, Punisher and Moon Knight in this annual that has Mark Brooks penciling Bendis' script. Captain De Wolfe plays a big role in this story involving the heroes going after the Kangaroo. There were little scenes that got the reader caught up on each hero that appears in the book that sort of sidetracked the story, but I thought they worked. And there was a neat ending with the Kingpin. It's funny that I loathe the Moon Knight title in the Marvel Universe, but love him here under Bendis' hand. But it's really the creators that make the characters what they are. A-

Fables #52 - The first issue in the "Sons of Empire" storyarc drifts between the homelands and Fabletown, featuring Red Riding Hood and a cleric attending a meeting of bigwigs with the Adversary. And the Snow Queen becomes really, really cool. There's also a back-up story featuring Rapunzel, with art by Gene Ha. A-

Devi #2 - I have to say, I'm really enjoying this book. I didn't think I would, but there it is. Great art by Mukesh Singh and really cool characters. It's set in India, so some of the customs are kind of strange (and conservative), including a joke on a slang word that you won't get unless you read the footnote. But it's a good story and I can't wait to see the confrontations that the story is building toward. B+