Showing posts from April, 2010
Show all

Nomad: Girl Without a World TP 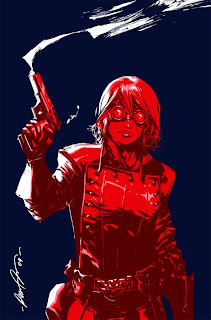 Sean McKeever & David Baldeon I was a little thrown by this book, to be honest.  I've read other works from Sean McKeever before, such as Sentinel , so I guess I shouldn't have been surprised that it had such an all-ages feel to it, but somehow the title and circumstances around the lead character made me think it would be more of a dark, serious story.  But while it does tackle some grim issues, Nomad: Girl Without a World remains a pretty colorful superhero title that would sit well among the books in Marvel's Marvel Adventures kids line.  But I'm not complaining - it's kind of refreshing actually.  I mean, more superhero books should be aimed at younger readers instead of catering to long-time fans.  I just expected a different experience going in than what I got. This book is about Rikki Barnes, who was the present-day sidekick to Steve Rogers, Captain America, as Bucky.  In her world, that is (she was transported here during the Onslaught: Reborn mi
Post a Comment
Read more 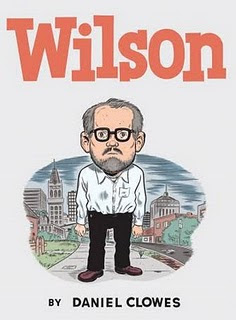 Here's the book that you should be paying attention to at the local comic shop tomorrow... Wilson GN - An all-new full-length graphic novel from master cartoonist Daniel Clowes!!  The few reviews I've seen have been pretty glowing, and I'm sure from the quality of his past works that this is going to be one of the best graphic novels of the year. Other Noteworthy Releases Abandoned Cars SC City of Spies GN Fraggle Rock #1 (of 4) Fruits Basket: Banquet GN Little Lulu Giant Size (Volume 1) TP Super Spy: Lost Dossiers GN
Post a Comment
Read more 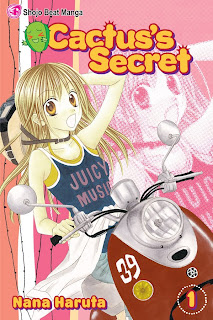 Cactus's Secret (Volume 1) Nana Haruta Cactus's Secret is a new shojo manga release from Viz, who have turned out a lot of great manga over the years.  Unfortunately, this title isn't one of their strongest.  Cactus's Secret follows a girl named Miku who has a secret.  It's not the most original secret - hardly anything about this book is original - she merely has a crush on one of her classmates, a gorgeous, but clueless boy Kyohei, whom she has the luck of sitting next to in class (even when the seats get rearranged, it seems that destiny favors her).  And Kyohei seems to genuinely like her, which is why she eventually summons up the courage to confess her secret to him, but Kyohei is pretty dense, and her hints and confessions are misinterpretted at every turn, frustrating Miku to the point where she lashes out at him.  Which is when she gets called a cactus by Kyohei, because she's acting "prickly" toward him.  Actually, he calls her a "c
Post a Comment
Read more 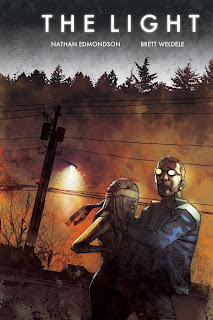 Nathan Edmondson & Brett Weldele The Light is a new mini-series from Image Comics that just saw its first issue sell out at the distributor, but is still available in some comic shops.  It's not surprising that it sold out really, as it has quite a neat little horror hook.  Anybody who looks at light, be it a light bulb, computer screen, television or whatever, suddenly burns up from the inside out.  So in a small town, Coyle tries to keep his daughter safe from the threat that is killing his friends and neighbors, by avoiding looking at anything illuminating.  But it's kind of hard to avoid actually seeing something until it's too late, so the characters are basically blind as they fumble in their quest to find safety.  It's a really cool idea, one I'm not sure where the creators are going with, with any number of social commentaries they could be pulling out of the premise of man vs. technology.  Brett Weldele ( The Surrogates ) has a sketchy sort of art t
Post a Comment
Read more 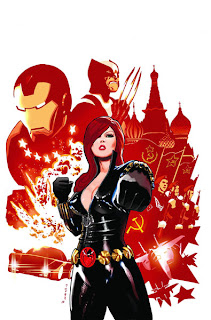 Marjorie Liu & Daniel Acuna With Black Widow debuting on the big screen in a few weeks in Iron Man 2 (played by Scarlet Johansson), Marvel has wisely launched a new on-going series starring the red-headed ex-Russian-spy Avenger Natasha Romanoff.  There have been a few mini-series as of late, including Black Widow: Deadly Origin (Paul Cornell & Tom Raney) and Black Widow & the Marvel Girls (Paul Tobin & Salva Espin), both of which were disappointments, so I was preparing myself to be disappointed once again with this new series debut, but it seems that the third time really is the charm for Black Widow.  In case you're unfamiliar with Black Widow's elaborate history, there's a nice recap at the back of this issue to get new readers up to speed, including anything readers may have missed in the recent Black Widow: Deadly Origin .  I'm personally a little surprised that Marvel hasn't done more to highlight Greg Rucka's work on Black Widow, sinc
Post a Comment
Read more 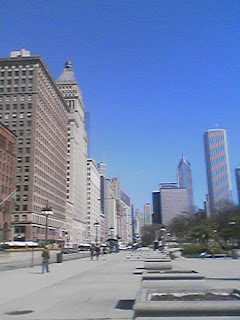 C2E2 (Chicago Comic & Entertainment Expo) debuted this year in Chicago over this past weekend with 27,500 unique attendees, which is a bit lower than Wondercon, and well below the numbers boasted at San Diego Comic-con and the New York convention.  However, it's a pretty solid first year, and a great first step in the right direction for securing a real comic book convention force in the Midwest since Wizard World: Chicago has been steeply declining for the last several years.  Aisles weren't clogged with patrons, certainly, but there was steady traffic, and when I attended the Archaia panel, the publisher admitted that the foot traffic wasn't up to San Diego standards, but they were doing stellar sales, as the people attending were buying .  The floor seemed open and inviting with plenty of retailers selling books at half price, mostly mainstream comics.  I feel like more people were interested in buying trade collections than back issues of comic book floppies, and
Post a Comment
Read more 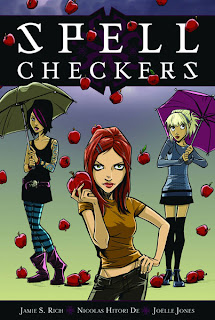 Here is the book you should be paying attention to at the local comic shop tomorrow... Spell Checkers (Volume 1) - There's no obvious stand-out this week for the book you should check out, so I'm pointing out this book that may be under many people's radars.  From Oni Press , this is a book about teenage witches with a really clever title from Jamie S. Rich and Joelle Jones (the team behind 12 Reasons Why I Love Her ), and Nicolas Nitori De ( here is an interview with the artist at Robot 6 ).  If DC were still putting out their Minx line, this seems like it would be a good fit.  So anybody who misses those sorts of stories may want to check this out. Other Noteworthy Releases Absolute Green Lantern: Rebirth HC Art of P. Craig Russell HC Basil Wolverton's Culture Corner HC Bloom County Complete Library (Volume 2): 1982-1984 HC Greetings From Cartoonia SC Mome (Volume 18) GN Okko: The Cycle of Air #1 (of 4) RASL (Volume 2): Fire of St. George TP Shinjuku
Post a Comment
Read more

April 19, 2010
Sorry, no Manga Monday this week, as I just returned from C2E2 this weekend and am pretty tired...and I caught a cold, but luckily that was just on the last day.  Watch for a C2E2 report soon!
Post a Comment
Read more 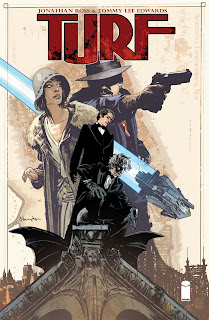 Jonathan Ross & Tommy Lee Edwards The new Image mini-series Turf is about New York City in the late 1920's, with the prohibition, gangsters and flappers that you'd expect to see during this era.  The only difference in this book is that there are vampires too, and during this time period, they want to rule the city, and begin to take out crimelords and their gangs to make that happen.  Also thrown in to the mix are aliens who have crashlanded who may want their own piece of the pie.  It's a very rich premise with lots of possibilities, so it's no wonder that it's already caught Hollywood's eye .  The story and its characters of goons and dames is pretty engrossing, and certainly captivated me throughout.  I can see the dense dialogue turning some people off however, as it is really quite verbose.  I didn't mind however.  The dialogue's great, with Ross and Edwards really painting a fully-realized corrupt world surrounding the turf wars.  This book
Post a Comment
Read more 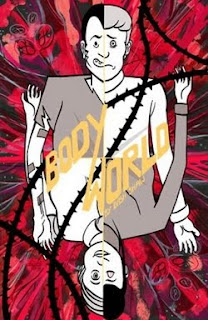 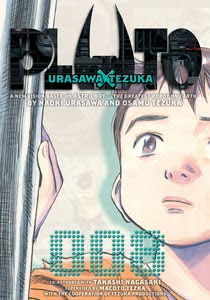 I didn't have a chance to check out any new manga this week, as I'm working a long string of days leading up to C2E2.  But here are some books that I'm following and some brief thoughts on the latest volumes... Pluto (Volume 8) Naoki Urasawa Based on Astro Boy by Osamu Tezuka I don't want to give away anything for anyone who hasn't picked up this amazing series, but the conclusion is wholly satisfying, with a nice tribute to Tezuka's ending, and a great little epilogue after the final scene of the main story that I really enjoyed.  Urasawa's art and storytelling are top-notch consistently throughout the book, right up until that last page.  Urasawa more than deserves his Eisner nominations. Hot Gimmick VizBig Edition (Volume 4) Miki Aihara After the big conclusion to Aihara's popular Hot Gimmick , I was left a little unsettled.  Hatsumi is just too passive of a character.  Coupled with her attraction to a verbally abusive guy and her weird re
Post a Comment
Read more 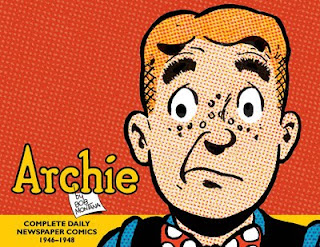 Diligently wading through the phone book that is Previews Catalogue so you don't have to...here are ten choice books shipping to comic shops in June that I think may get overlooked or that I'm just plain excited about... 1. New reprint collections - There a ton of new reprint projects debuting this month, from  Beetle Bailey to The Wizard of Id to Best of Dick Tracy .  The ones I'm most excited about are (not necessarily in this order) 1)  Krazy Kat: A Celebration of Sundays HC , reprinting the greatest Krazy Kat Sunday pages in their original size and color from the wonderful publisher Sunday Press Books , 2)  Felix the Cat: The Great Comic Book Tails HC , from Craig Yoe's IDW imprint, this collects comics from original Felix artist Otto Messmer, and 3) Archie: The Classic Newspaper Comics (Volume 1) HC , which sees Bob Montana work his magic with the gang. 2. Darkstar and the Winter Guard #1 (of 3) - I really enjoyed the Hulk: Winter Guard one-shot, so I&#
Post a Comment
Read more 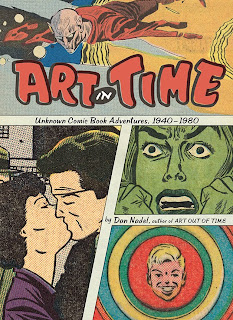 Here's the book you should be paying attention to at the local comic shop tomorrow... Art In Time: Unknown Comic Adventures 1940-1980 HC - The follow-up to Dan Nadel's excellent Art Out of Time: Unknown Comic Visionaries 1900-1969 HC is this new offering with overlooked comic works by big-name artists such as Jesse Marsh and John Stanley, as well as more obscure names.  If his previous anthology was any indication, Nadel is sure to have picked some exciting, high-grade comics for this new book. Other Noteworthy Releases Batman and Robin (Volume 1): Batman Reborn HC Lil Abner (Volume 1) HC Market Day HC Rosario Vampire: Season II (Volume 1) S.H.I.E.L.D. #1 Spider-Man: Fever #1 (of 3) Walt & Skeezix (Volume 4): 1927-1928 HC - Finally!!
Post a Comment
Read more 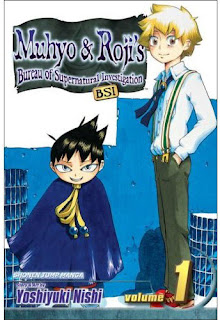 Muhyo & Roji's Bureau of Supernatural Investigation (Volume 1) Yoshiyuki Nishi From Viz's Shonen Jump line comes this creepy little action title Muhyo & Roji's Bureau of Supernatural Investigation .  The book follows a duo who work together to find ghosts and exorcise them for clients.  Toru Muhyo is the little genius who casts the actual spells that send spirits to either Heaven or Hell (and the various pocket dimensions the two places encompass) depending on the ghost that they encounter.  Muhyo finds an appropriate place to send the being based on the laws it has broken from the Magical Law Book.  He's actually a Law Executor, giving him the power to pass judgment and interpret the crimes.  Jiro Kusano or "Roji," is Muhyo's assistant, and is the low man on the totem pole.  As a mere 2nd Assistant, he has little power in the Bureau and is literally on the bottom of the ladder of positions, although he aspires to one day become Executor.  The
Post a Comment
Read more
More posts