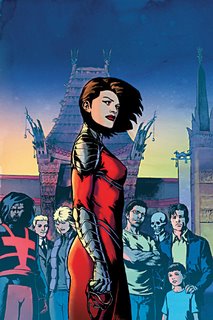 Manhunter #25 - What would have been the final issue of the series would have been a great one. Kate Spencer finally confronts Sweeney Todd, a fight that's been brewing for awhile, in an unexpected place. The final page of the issue boasts a new era beginning for Manhunter with the next issue, which won't be until December... A-

Runaways #19 - The runaways deal with the death of their friend in the first chapter of "Dead Means Dead." It'll be interesting to see the dynamic of the characters now, with a new runaway in their midst, and everyone dealing with the tragedy in such different ways. B-

Nextwave: Agents of H.A.T.E. #7 - I'm enjoying this story arc much more than the previous one. The team fighting a bunch of monsters coming out of a Hell Dimension suits them somehow. A-

Fell #6 - This was a great issue for the series, possibly the best yet. It's quite disturbing and highlights Detective Fell's investigative prowess (and unconventional means to get results), as well as containing some nice moments between the good detective and Mayko. A