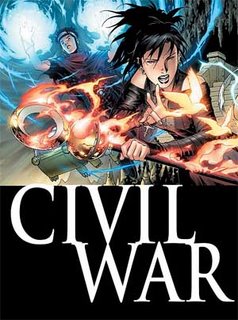 It's a little strange having someone else write the Runaways when Brian K. Vaughan has been doing it for so long. I'm fairly sure Young Avengers has been written soley by Allan Heinberg so far too, so putting them in this book, written by Zeb Wells, feels just a tad bit weird. I guess I kind of see Runaways as Vaughan's series, like I see Savage Dragon as Erik Larsen's and Bone as Jeff Smith's, even though the Runaways are corporate characters in the end. But anyways...Zeb Wells does a pretty good job of capturing the Runaways. I don't know Xavin well enough to speak for him since he's brand new to the regular title, but the others don't feel too off, perhaps with the exception of Chase, who I didn't feel was quite there, even in face of the loss he recently suffered which would allow for some leeway. Molly's pretty much dead-on and she had a pretty cool scene already in this issue (though to be honest, not a fan of the brat). Like I said before, I'm not familiar with the Young Avengers yet, and there were a few conversations that made me feel like I was missing something, but for the most part, I feel like this is a fine introduction to the team (Wiccan seems to be the only standout character upon first impressions). I really enjoyed Stefano Caselli's pencils on the book, particularly when it came to Nico. The story he paints for us is pretty much about how the two teams meet in wake of the Superhero Registration Act. It's a neat little story and I'm looking forward to the next three issues. I'm not sure how someone coming at this having not read either books would react, let alone having not read Runaways...I have a feeling they would mildly enjoy it, but the characters are what make the title. Molly has super strength. Very generic power. It's her character and how she's written that adds up to a little piece of the Runaways. Without knowing the characters and their relationships...it seems a tad busy to just jump in fresh. But surely Marvel's brilliant marketing strategy for this title was to get readers of both titles to pick this up and begin following the other title as well. And not such a bad idea when it comes down to it. B