Showing posts from May, 2007
Show all 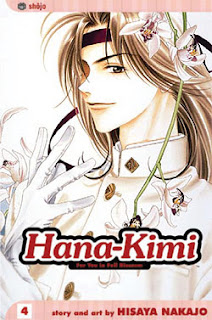 This week, I read a lot of Hana-Kimi . I love buying a lot of a manga series and reading it in quick succession. I did the same thing with Death Note . The stories just seem to flow better, and Hana-Kimi is a series with several volumes already out, so I have a lot of catching up to do... Hana-Kimi (Volumes 2 - 4) Hisaya Nakajo This is a really fun shojo series to follow. Like I said before , this series follows a young girl named Mizuki who has left her family in America to go to an all boys' school in Japan in secret, to be close to Izumi Sano, her inspiration. She quickly makes friends and happens to be the roommate of her heart's desire... Each subsequent volume of the series is just as fun as the first. Silly, dramatic, funny and lovely. I really enjoy the supporting character in the series named Nakatsu, who has a crush on Mizuki without knowing she's a girl, but unable to help himself and his "gay" feelings. He's always funny and I keep help root
Post a Comment
Read more 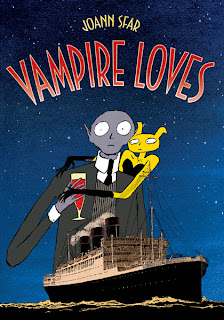 Joann Sfar Vampire Loves contains some beautiful art from Joann Sfar. The art was probably the primary reason for picking this title up in the first place, that and I can be in the mood for a cute, silly supernatural book such as this sometimes, and the mood struck me when I saw this title. And it is all of that: cute, silly and beautiful. Unfortunately, the rest doesn't hold together all that well. This is a good book, but like the book jacket says about Sfar's writing style, it's rambling. And when I agree with that description, I mean it meanders. It's all over the place, without much focus. The book basically follows Ferdinand the Vampire as he goes on several adventures, seeking love in all the wrong places. But the story also shifts to scenes of Ferdinand's friends (sometimes even before they've crossed paths with Ferdinand) in their relationships and extracurricular activities. I guess if there is a theme to the book it's summarized in the
Post a Comment
Read more 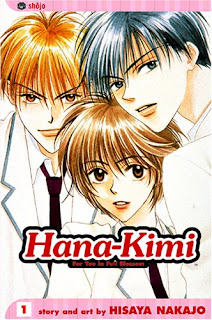 Hana-Kimi (Volume 1) Hisaya Nakajo I noticed this book while I was shelving manga at work...it was a really tame design - not as in-your-face-read-me as a lot of other manga, and I noticed that there were plenty of volumes out already. Then I saw the first volume at a used bookstore and read the back cover, consequently picking it up. And I'm glad I did. It's not the most original premise in the world or anything. It's about a young girl, Mizuki Ashiya, who goes all Mulan and joins an all-boys school when she leaves her parents back in America to attend school in Japan. She decides to pose as a boy so she can be close to high jumper Izumi Sano, who's a big inspiration to her, and whom she wants to high jump with some day. As luck would have it, not only is she in the same class, but she also becomes his roommate! Of course, this presents problems in itself, along with the infatuation most of the school seems to have for this new "pretty boy" who acts so
Post a Comment
Read more

May 20, 2007
This is a great review of the fantastic 28 Weeks Later , courtesy of Sean Collins. And here is a thought-provoking essay on something that should be rule-of-thumb.
Post a Comment
Read more 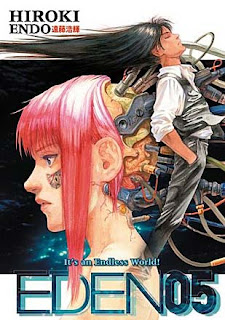 Eden: It's An Endless World! (Volume 5) Hiroki Endo The fifth installment of Hiroki Endo's post-apocolyptic sci-fi series delves into the past of one of the most intriguing characters of the cast of characters - that of Sophia, the "pretty hate machine" the first two chapters of the book are named after. Sophia shares her disturbing past, void of feeling, physically and emotionally, with a program that's manifested in her mind as she's being repaired. Afterward, the cast of characters involved in previous epic battles use their skills in an attempt to rescue the main character of the series' - Elijah's - mother and sister from enemy hands. Unfortunately, this volume of the series is very disappointing compared to previous installments. Sophia's past isn't very interesting and only serves to strip away much of the mystery that makes her character cool in the first place. The big battle that ensues is a pale shadow of former battles in the series
Post a Comment
Read more 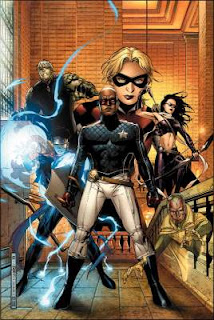 Family Matters Allan Heinberg, Jim Cheung, Andrea Divito, Michael Gaydos & others . The second volume of Young Avengers takes place before the events of Civil War turned the Marvel Universe on its head, so the arguments that take place between the kids and the New Avengers is whether they are too young to fight as superheroes. Captain America believes so and would tell the kids' parents to stop them. Secrets are revealed as the Young Avengers debate the best course of action, and find themselves unable to hang up their tights. This volume also blatantly addresses the blooming love between two male members of the team: Wiccan and Hulkling, and portrays their relationship in a positive way, pretty much scrapping any stereotypes associated with homosexuality (aside from the obligatory coming out scene) and making them, for all intents and purposes, like any heterosexual couple in comics, but for the fact that they are both male. . This book sees the young heroes battle Mr. H
Post a Comment
Read more 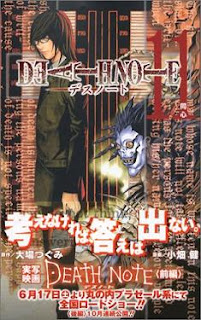 This week, two quick reviews of books illustrated by Takeshi Obata... Death Note (Volume 11) Tsugumi Ohba & Takeshi Obata The latest installment of one of the best manga out there presently sees many pieces being set into place before the endgame between Light and Near. I believe there are two volumes left of the series, but I've heard from other sources that there is only one more, because they were published differently in America. Either way, the ending is going to be tense with what we've seen leading up to it thus far. The art is beautiful as ever among a few surprises and high tension between all of the players. Unforunately, this particular volume felt like it was leading up to something big with little in terms of memorable scenes. It's great in the context of the bigger picture of the series, but on its own, it hardly stands as something spectacular. B+ Hikaru No Go (Volume 9) Yumi Hotta & Takeshi Obata Takeshi Obata also does fantastic work on the ne
2 comments
Read more 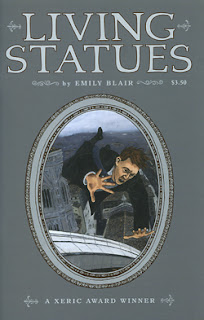 Emily Blair A one-shot comic from the talented Emily Blair hits comic shelves this July (courtesy of Locust Street Comics) and should get more notice than it inevitably will. The black and white issue follows a cynical teacher on a trip to Florence with his class, where he sees that things have changed from his visit as a college student, for the worse. Particulalry in the form of the living statues, who pose as David and Neptune, stone-still, for money. But his contempt goes beyond that, as he sees all of the tourists, his students, his fellow chaperones, as simple and unappreciative beings. This lonely, bitter man wonders how those around him would react to different situations (like if he fell over a guard rail) and lets a stray word slip here and there as he does his best to alienate himself among the beautiful art that I can only think of calling a woodcut sort of style. It's a very interesting look and a work with a lot of depth, particularly impressive for a single 32-page w
Post a Comment
Read more

May 01, 2007
I don't get it when people say that they won't see a movie with Justin Timberlake in it. His performance in Alpha Dog is supposed to good, but because it's Justin, people won't see it. And people say they "can't stand" Sarah Michelle Gellar or Katie Holmes. I personally don't like Tom Hanks' performances because I think he overacts in a manner that I find abrasive, but that's the art and is fair game. Not liking a celebrity is just kind of immature. Because they're a celebrity, people suddenly have the right to make snap judgments? How would these people like the same treatment? I'm prone to like celebrity gossip as much as the next person, but some people are just so mean-spirited toward celebrities. Is Sarah Michelle Gellar too pretty, and women are jealous? Does Katie Holmes remind someone of a stepsister? I don't get it. Justin Timberlake is extremely talented. He's a great performer, great songwriter and singer, and he can
1 comment
Read more
More posts