August 15, 2006
The stuff you may want to think about picking up on Wednesday at the comic shop... 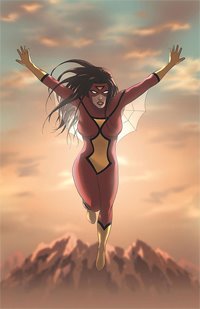 Spider-Woman: Origin Premiere HC - I'm not sure if this series really justified a $20 hardcover collection, but it was a really good mini-series from Brian Michael Bendis, Brian Reed and The Luna Brothers.

Claws #1 (of 3) - Black Cat and Wolverine. An odd pairing, but they do both have claws... Could be fun, and if the cover's any indicator, the art will be good at the very least.

Adventures In Oz TP - The full Eric Shanower series (all five books) are bound in one 250+ page collection from IDW Publishing. If Age of Bronze is any idicator, this series is going to be a beaut.

The Drifting Classroom (Volume 1) - This is a really great new manga! It's been in bookstores for about a week now, but is shipping to comic stores on Wednesday.

Monster (Volume 4) - The latest, greatest installment of Naoki Urasawa's chilling manga (so far) makes its way to comic stores, also following over a week of being in bookstores.