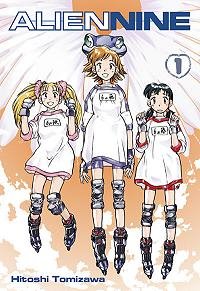 Alien Nine is a pretty wacky manga that follows three girls who have all been nominated by their respective classes to be in “The Alien Party.” The girls get out of a lot of regular classwork and such, but in exchange, they must don alien helmets and hunt down a variety of aliens that roam the school grounds. The bug-eyed symbiotic aliens that the girls place on their heads protect their wearers from harm, but can also lash out if their human host is frightened. For their protection, all the aliens ask in return is to feed off of the girls’ bodily waste: sweat. The aliens can be seen licking the naked girls‘ backs with their long tongues in a few unsettling panels.

Of the three girls that take on the responsibility of alien hunters, Yuri is the main focus of this volume, and she isn’t very good at the tasks she’s assigned, and doesn’t really want to be a part of the team at all. She has a strained relationship with her alien, often throwing out hurtful comments without thinking and sighing in its face. Kasumi, in contrast, is gifted when it comes to alien-hunting and uses the abilities her alien provides in creative ways, with amazing results. The final girl, Kumi, is very serious about the job at hand and is easily frustrated by Yuri’s performance, and is jealous at the same time of the promise Kasumi demonstrates. To her, this isn’t necessarily fun for her like it is with Kasumi, but it is a job that she wants to perform to the utmost of her ability.

This is a fun book. I was really surprised by how much I enjoyed it. There’s a mystery that shrouds the series about how the world ended up the way it did. It’s all passed off without explaining the details of the aliens they battle and how they work, as if assuming the reader would already know. It’s really cool in that regard. But it’s really a cute action story at its core. It does get surprisingly dark as the series progresses, often shockingly so as girls encounter situations they don't know how to deal with, and with the disturbing changes the girls' bodies go through when their relationships with the aliens progress. These dark scenes, along with some surprisingly tender moments, tend to break up the cheerful tone of the book, but for the most part, you can go into a chapter expecting a good time and a smile, but really any direction the creator decides to take the story is fine with me because it's all executed brilliantly. Though in spite of that light-hearted attitude the series tends to take (and advertise), it is a surprisingly complex, multi-layered work with some genuinely fantastic characterization. Tomizawa’s art is wonderful as well, as are his designs for the aliens contained within. Sure, the girls may look a little silly in their battle gear, but the creatures are truly alien and strange, and act very differently from one another, keeping readers on their toes since it’s hard to know what to expect with the next encounter.

In case you couldn’t tell, I was extremely impressed with the first volume of this series. The consistent quality and intrigue of the series, as well as the interesting characters, combine to make Alien Nine one of the most promising manga series I’ve picked up in recent memory. A

And in case you missed it, our most recent Double Take featured Tsugumi Ohba and Takeshi Obata's Death Note (Volume 7).