Most Anticipated Comics of 2008

January 09, 2008
2007 was a great year in comics. And while 2008 has just started, plenty of announcements have made it clear that it's going to be another fantastic year for the medium. Here are some of our most anticipated titles scheduled to be released in 2008...
Patrick’s Picks:
Astonishing X-Men: Second Stage - I’ve really been enjoying Joss Whedon’s and John Cassaday’s run on Astonishing X-Men, and will be sorry to see them go. I have confidence, though, that this relaunch of the title, by Warren Ellis and Simone Bianchi, is also going to be a well-crafted, entertaining superhero comic, likely as different in tone from Whedon’s work as Whedon’s was from the Grant Morrison material that preceded it. 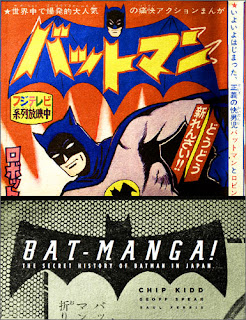 Bat-Manga: The Secret History of Batman in Japan - Edited by Chip Kidd with photography by Geoff Spear, this book collects Kiro Kuawata’s Batman manga from the pages of Shonen King, as well as documenting the short-lived Batman craze in the late 60’s in Japan. I adore the Kidd/Spears art books (Batman: Animated, The Golden Age of DC Comics: 365 Days), and I’ve a feeling this book may be their best yet. Very excited about this one.
Black Jack - More Osamu Tezuka is always a good thing, and this year our friends at Vertical are bringing the manga master’s infamous medical adventure drama to these shores. There’ve been a few other attempts to sell this material to American audiences, so here’s hoping the time is finally right for Black Jack to take America by storm.
Cold Heat - I really enjoyed the four issues of this Ben Jones, Frank Santoro collaboration that were released before the untimely cancellation of the serialized installments. The release of the complete graphic novel is certainly something to look forward to.
The Comics Journal #290 - I’ve been interested lately in children’s picture books and their relationship to comics, so I’m really looking forward to reading the interview with famous children’s book author/illustrator Maurice Sendak to be featured in this issue of the Journal. 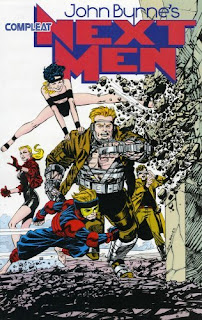 The Complete Next Men - If publisher IDW’s goal was to peak my personal interest in this particular project (and isn’t that really every publisher’s goal?), the timing couldn’t have been better for the announcement of this, a collection of John Byrne’s 1990’s series Next Men, a comic of which I was quite fond at the time of its initial publication but which I’ve not revisited since, in the thick, black and white format popularized by Marvel’s “Essential” line of books. With my renewed interest in Byrne’s work and my fondness for the format, this seems like a perfect opportunity to revisit an old favorite. Also, is it just me, or is IDW positioning themselves to become one of the most interesting and diverse publishers around?
The Complete Pogo - This series of reprints, collecting Walt Kelly’s classic comic strip, has been significantly delayed from its original release date of October ‘07. I’m sure it will show up sometime this year, however, and I’m very much looking forward to it. I’ve not read much of the strip at all save for a few excerpts in anthologies, so I’m taking it primarily on faith that it is as good as everyone says.

Dal Tokyo - A long-awaited collection of Gary Panter’s long-running comic strip.
Dororo - I’ve not heard much discussion of this one, but it sounds fantastic. Yet another Tezuka release by Vertical, this manga features the adventures of a young man as he attempts to recover his 48 stolen body parts from a host of devils in Japan’s Warring States period. Keep those Tezuka books coming, Vertical! 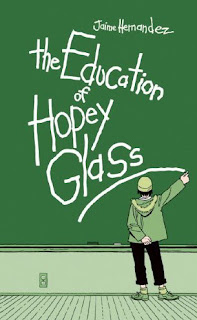 The Education of Hopey Glass - The new graphic novel by Jaime Hernandez. Need I say more?
Gary Panter 2-Volume Slip-Cased HC Set - Holy crap, this is going to be awesome. These two books (the first: an extensive monograph featuring work from the artist across various mediums, augmented by essays and an extensive interview with Panter, and the second, featuring selections from the artist’s sketchbooks) make up my most anticipated release of 2008.
Jack Kirby’s Fourth World Omnibus Vol. 4 - I’ve bought the first three volumes, but I’ve held off on reading them in anticipation of the release of this final book, so that I can read the entire thing all together.
Jessica Farm - If you’ve read Josh Simmons’ first graphic novel, House, and/or his brilliant and disturbing “Batman,” then you know the announcement of a new graphic novel by the artist is cause for celebration. If I’m not mistaken, I believe this is the first in a series.
Kirby: King of Comics - As the author himself has stated, this is not Mark Evanier’s long-awaited, comprehensive biography of Jack Kirby. It is a lavishly produced art book featuring a shorter biography which can be seen as a sort of preview of that still forthcoming comprehensive book, which should nevertheless prove to be an extraordinary book in its own right, and the closest we’re likely to come to a “definitive” take on the career of one of comics’ most important creators until that second book of Evanier’s is finally finished.
Kramer’s Ergot 7 - I’m not even sure if Sammy Harkham is going to be releasing another installment of his seminal art comics anthology this year, but I hope that he is. 2007 was poorer for the absence of a new Kramer’s, and comments made by Harkham regarding a major format change for the next volume have me very excited for this book, whenever it shows up.
Love and Rockets Vol. 3 #1 - It’s going to be good to see this title again after so long an absence, and I think the change to a larger, annual format makes a lot of sense, as Los. Bros. Hernandez reposition themselves to fit more comfortably into the new comics landscape their work helped make possible. 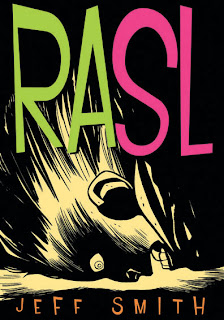 RASL - This is Jeff Smith’s first major post-Bone project, a comic book series about an art thief with the ability to traverse dimensions. Smith is undeniably one of the major cartooning talents actively working, making this a “can’t miss” comic.
So That’s Where the Demented Wented: The Comics and Art of Rory Hayes - I couldn’t possibly be more excited about this: a complete collection of Rory Hayes comics, edited by Dan Nadel, to be published by Fantagraphics. I expect this to get a lot of attention, in the way that Paul Karasik’s Fletcher Hanks book did in the year just past.
Strange and Stranger: The World of Steve Ditko - Blake Bell’s long-awaited, definitive biography of Steve Ditko is perhaps second only to Evanier’s Jack Kirby book in terms of books about comics I’m looking forward to reading this year.
Toon Books - I’m very interested to have a look at this new line of children’s books from editor Francoise Mouly, to be released in two waves in the Spring and Summer of ‘08. Mouly has lined up some top talent for these books, including Art Spiegelman and a favorite of mine from the pages of Mome, Eleanor Davis.
What It Is - This is Lynda Barry’s new book from her new publisher, Drawn and Quarterly. Plans are also under way to reprint the entirety of Barry’s comic strip masterpiece, “Ernie Pook’s Comeek,” in a series of five books, making 2008 a very good year to be a Lynda Barry fan.
Dave’s Picks: 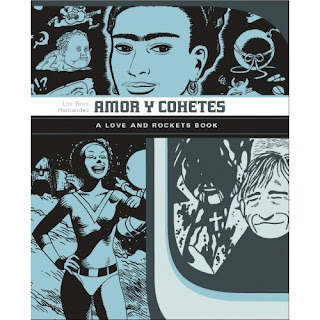 Amor Y Cohetes - The final volume of the Love & Rockets reprints in the new-reader-friendly (and quite nice looking) packaging collects odds and ends of the series from Jaime, Gilbert and Mario Hernandez.
ClanDestine - Just because I’m such a fan of the original Excalibur, I’m really looking forward to the series that Alan Davis wrote and illustrated that borrowed a lot of similar themes from the X-series he worked on. Both the reprint collection and the new series could be pretty neat.
The Complete Little Orphan Annie - I really love the reprinted comic strip collections that IDW Publishing has been releasing recently (Terry & the Pirates, Dick Tracy), and I’m happy that they have taken on Harold Gray’s classic strip, which they’re bound to bind in a beautiful package worthy of the work.
Giant-Sized Astonishing X-Men - The final issue of Joss Whedon’s and John Cassaday’s fantastic run on the X-Men flag title comes to an end in an extra-sized issue that’s sure to thrill and amaze.
Goddess of War - I’ve been waiting awhile for Laura Weinstein’s graphic novel from Picturebox, and it’s finally to see the light of day this year! 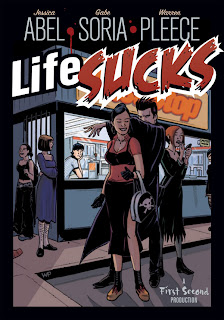 Life Sucks - This sounds fun - a new vampire graphic novel by First Second Books from Jessica Abel and Gabe Soria, with art by Warren Pleece.
Little Vampire - Also from First Second, in a new trim especially for new readers, is Joann Sfar’s Little Vampire, the childhood adventures of the monster featured in the recent Vampire Loves.
Serenity: Better Days - A new Serenity mini-series from Dark Horse, featuring the creators behind Serenity: Those Left Behind a few years ago, including series creator Joss Whedon.
Strangeways: Murder Moon - Werewolves in a western setting. Has a lot of potential. 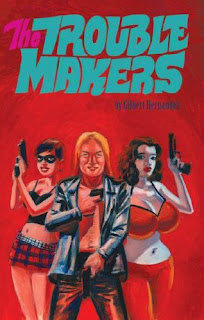 The Troublemakers - Another new graphic novel by Gilbert Hernandez! If Chance In Hell and Sloth are any indication, this is going to be a strong competitor for best book of 2008.
Wolverine: First Class - I’m not sure if Kitty Pryde is going to be a regular on the new Astonishing X-Men series from Ellis and Bianchi, but at least we’ll have this on-going featuring the mutant, as she pairs off with Wolverine.
...
Anything exciting that we missed?