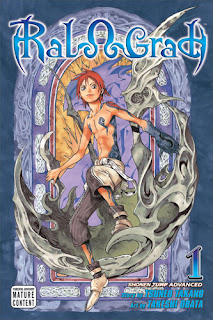 Ral Ω Grad is the highly anticipated new project from the artist behind Death Note and Hikaru No Go, two exceptional manga. His follow-up is based on the video game Blue Dragon, and is written by Tsuneo Takano. The book follows young Ral who was confined into a cage of sorts as a baby, as his shadow was taken over by, well, a Shadow, a complex creature that uses living creatures to manifest itself in several different ways. Ral's Shadow is a feared great dragon, and he is the only hope of a kingdom being crushed beneath the armies of Shadows. Miss Mio visited Ral daily in his confinement, conversing with him and teaching him, about Shadows in particular, and remains in that role as Ral travels to purify the land. The way that Shadows manifest are a little complex. There are three forms known, of which Ral and the shadow dragon Grad are an exception (and Grad is a rare, but not the only, Shadow not allied with the goals of the rest of his kind). Ral is a rambunctious kid who loves, above all else, boobs. He vows to fight Shadows for girls. He wants to fondle them as rewards. He's pretty much obsessed with them. It makes for some pretty silly, immature humor that nonetheless coaxes a laugh out of me from time to time. The art is, as is usual with Obata, pretty awesome, although Ral Ω Grad suffers from some pretty elaborate designs for the Shadows that makes the already-complicated action sequences hard to follow at times, let alone make out what appendage is supposed to be what. It's also a pretty straight-forward fantasy and less thrilling than the immediately appealing, and singular, titles Obata has worked on in the past. Despite its faults, I do plan on continuing to follow the series, at least for a few more volumes. There's certainly potential, and I have faith in Obata, as I pretty much fell in love with Hikaru No Go and Death Note. That's certainly enough reason for me to give the good-but-not-great opening chapters a chance to steer the book into something more worthy of his talents.