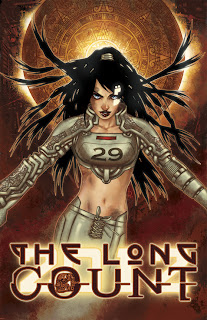 The Long Count is a new twelve issue mini-series that takes place in the year 2012 AD. It's a science fiction title, but it's like none I've ever read before. It's really gritty and urban, very dark. But it's also fun with some smart writing, particularly the first few pages introducing readers to the world that's laid out, a world that's unlike our own, as the Mayans and Aztecs succeeded in besting the Europeans, keeping "Colombiana" free of any more influence, and reinforcing a strong faith in tradition and legends amongst its people, a faith that blinds its residents to the encroaching end of the Mayan calendar, the end of the long count. Sports icon Carmen Sandoval is alone in listening to her mentor, the great dragon Quetzalcoatl, and his warnings. And so she faces street demons and gangs to reach her friend and discover what she can do to help her people.

I really like the design for Carmen, and when the action is executed well, she looks awesome disarming a punk or besting demons. But the action was a little hard to follow at times. It's a small gripe, but this issue is pretty much all action, so I think that it was important for it all to proceed pretty fluidly, as many of the sequences did. When I said it was dark before, I didn't just mean the tone of the book, but the art as well. It's really heavy on the black and earth tones, and I think that's part of the problem for the action, just distinguishing amid the shadows, for example, what she was doing to make black blood spurt out of a stone demon. And simply putting a little more emphasis on some black stuff that began to cover Carmen and incapacitate her would have done wonders for keeping the flow of the narrative moving smoothly - as it was depicted, I found myself backtracking to catch on to what was happening. I don't want to harp on this too much, just because the look of the book actually really worked for me and made it pretty unique. The Long Count isn't a perfect book, but I have to say that I really enjoyed entering this world, as intimidating as the backstory was. It's really fun and sharp, and I can't ask for much more from any genre comic I decide to pick up.