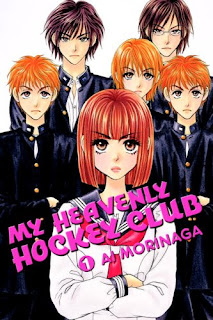 My Heavenly Hockey Club is a shojo manga series that follows Hana Suzuki, who loves two things in life: sleeping and eating (we have a lot in common). She is asked one day to join the school’s Grand Hockey Club (which is actually a boys’ team of which she is the only undercover female member), a club that she soon discovers is more about spending time at resorts and spas during away games than actually playing hockey (a sport she and the other players know little about). Suzuki’s life is really disrupted by the morning practice sessions and the handsome captain of the club, Izumi Oda, who enchants all of the women he sees except for Suzuki, who sees him as mostly a nuisance. But as she has the unnatural gift of blocking things from going into the net when she’s fast asleep, and can be bribed to do pretty much anything for food, she makes for a perfect addition to the team. This book really surprised me. It’s really a lot of fun with plenty of moments that made me laugh out loud. The characters aren’t exactly fully-flushed, but there’s a nice dynamic between them that keeps the stories pretty riveting. I usually don’t like really goofy manga, but I have to say that I really enjoy the goofy tone of this book. It can be slapstick one moment, and tender the next, and it doesn’t seem jarring. It’s pretty addictive, to be truthful. I recommend checking it out.