Amulet (Book One): The Stonekeeper 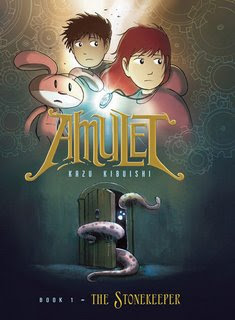 The first book in the new all-ages title Amulet was just released to comic shops this week, from Kazu Kibuishi, whose work readers may have seen in the popular Flight anthologies. And if there's anything you can say about this book, it's that the art is pretty awesome. It reminds me a tad bit of Jeff Smith's Bone, which is probably what Scholastic wants people to think of, since that young readers' fantasy series does phenomenonally well in bookstores. But this is no Bone. It has a very different feel to it. Less Disney meets Lord of the Rings and more Harry Potter meets Narnia. The story follows two siblings, Emily and Navin, as they move into a new house, and are quickly drawn into a new world through their basement. In this new world, they meet elves, magical toys and monsters, as they do their best to save their kidnapped mother and use their great-grandfather's mysterious amulet to make their way through the treacherous landscape. It's kind of a straight-forward, generic fantasy in a way, but there's plenty of interesting ideas thrown into the mix to keep readers on their toes. It opens with a pretty brutal prologue that may turn off some really young readers, but otherwise, it's a lot of fun throughout. And like I said before, the art is fantastic, and makes up for any shortcomings in the story. Kibuishi does a fantastic job of cartooning amid the great creature designs. And I really enjoy the atmosphere of the book. The colors at the beginning are sunny and cheerful, and grow colder and drab in the fantasy world that has an overall icy, dangerous feel to it. Some of the panels, like the parting shot, are truly quite breathtaking and probably reminiscent of the types of things people usually associate with the Flight anthologies where the creator first made his mark. All-in-all, I have to say that Amulet is a pretty well-crafted all-ages title containing some elements that could really catch on and make it a hit series.