Chickenhare (Volume 2): Fire In the Hole 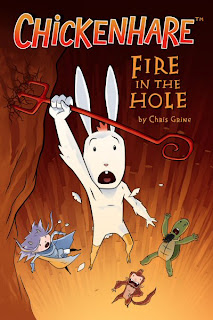 I really enjoyed the first Chickenhare graphic novel, so it didn’t surprise me that I liked the second one as well. Featuring the loveable half-breed animals from the first book, Chickenhare and his pals continue their voyage from pretty much the exact moment that the last book left off, and solve the lingering mysteries surrounding two of their companions, Banjo and Meg. Scabby, who was just introduced at the end of the first novel, becomes a vital character and a welcome addition to the cast of misfits as the story gets much richer this time around, while retaining many of the elements that made it work in the first place. It’s a lot of fun, pretty hilarious, and really cutesy. There’s plenty of action packed into the fantasy story, with witty banter exchanged between the loveable characters along the way. As Chickenhare bravely faces the scourges of hell and dark magic to save his friend Abe’s soul, plenty of interesting twists emerge in the plot and some deliciously evil villains are introduced. It is an all-ages title, despite the fact that it’s more violent in this incarnation, and really, it's probably one of the better all-ages titles that I've read in awhile. Chris Grine’s pencils are top-notch, proving once again just what a talented cartoonist he is, with some great new character designs, even for characters with small roles in the story, like a group of mermen. This is definitely a creator to watch out for, and if you haven’t yet, check out the first Chickenhare graphic novel, keeping in mind that it only gets better with the second installment. A lot better, in fact. It really did build on what was established with the first book, and took things to the next level. Chickenhare (Volume 2): Fire In the Hole comes out in April. Read the first twenty pages of each Chickenhare volume at Chris Grine’s site for free if you aren’t convinced.