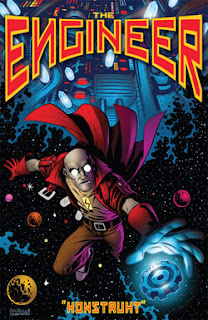 The new mini-series from Archaia Studios Press, The Engineer, is a rare superhero comic from the publisher, one that would fit snugly alongside Image Comics' lineup. The story follows a man who has been given the task to track down the parts of a cosmic device, the Konstrukt, that will stop a creature from devouring the universe. Three strange phantoms guide the Engineer as he travels to disorienting worlds after a little piano playing sends him on his way to another new land.

The Mike Mignola look of the art is appropriate for the strange title, one that pits the protagonist against all manner of creatures and beasts. There's a fun antagonistic relationship between The Engineer and the three phantoms, and the plot moves along at a fast clip full of action. This issue was basically set-up for the circumstances the Engineer finds himself in, and it's a decent beginning to a series with a lot of potential. But it hasn't demonstrated too much so far to make it stand out from the hundreds of other superhero titles to choose from each month. But, hey, there are three issues to go and the creators have barely scratched the surface of the premise. Check out the preview over at Archaia's website.