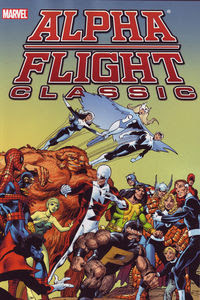 The new “classic” collection featuring Canada’s famous superhero team features eight issues of John Byrne goodness. While Alpha Flight had appeared in other Marvel comics (particularly Uncanny X-Men) before launching their own monthly series, there are back-up stories throughout the issues included that tell the origins of the team, delving into particulars of several team members’ origins. Among the characters on the team through these first eight issues are Vindicator (who quickly changes his name to Guardian), Sasquatch, Snowbird, Puck, Northstar, Aurora, Shaman and Marrina. This is the first time that Puck really takes center stage with the team, as Heather Hudson calls on some members from the secondary Canadian teams, Beta Flight and Gamma Flight, randomly selecting him and Marrina to aid the rest of Alpha Flight on a mission. Each of the issues actually seem to let a member of the team shine once the book gets going, my favorite being the classic “Snowblind” story, where Snowbird battles a creature that bathes itself in a snowstorm, the panels all completely white, save for dialogue and thought balloons. Speaking of Snowbird, she’s easily my favorite character here. She’s a little cold, but she has a fantastic design - one of the best designs of all superheroes in my opinion, and she has some neat powers over time along with her ability to shift into various creatures of the Arctic. This is all pre-Northstar coming out, though it’s written like Byrne had his orientation in mind all along, with the “good male friends” who come into the picture and Northstar's reactions to things involving them. His twin sister, Aurora, is strange. She has some multiple personality thing going on that keeps things interesting, as she’s liable to change on the team at the drop of a hat. Marrina actually leaves the team early on, during a story where she nearly disembowels Puck, involving the Invisible Girl and Namor, the latter of whom ends up taking her under his wing. The other members - Sasquatch, Shaman, Guardian and Puck - are kind of dull, but perhaps with upcoming issues, they get their respective moments to shine and become more interesting.

While I didn’t like the first volume of Alpha Flight Classic as much as other books from Marvel’s “Classic” collections, like Excalibur and New Mutants, it was worth the price of admission and I’m genuinely looking forward to the next volume. I was a little disappointed with the lack of big villains. The team working together to battle giant clumps of earth gets a bit old. And really, there’s not much in terms of great interaction between the group yet either. It all feels a little awkward, like the vision that Byrne had in mind for the team had yet to come together, but hopefully that will resolve itself with subsequent issues.