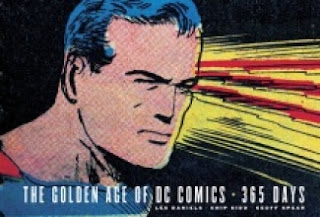 This book may be considered a part of two separate series of books, both the “365 Days” series of identically formatted books published by Harry N. Abrams (volumes devoted to the Beatles and photographs of the universe are included in this series), as well as the unofficial series of pop art books designed by Chip Kidd with photography by Geoff Spear (Batman: Animated and Peanuts: The Art of Charles M. Schulz, among others). It was my fondness for that second grouping of books that led me to this volume, a little under a year ago.
Yes, I’ve been waiting all year to write this review, because the way I read the book, one double page spread each day, corresponding to the calendar date ( I bought the book around March of last year, I think, so I had a bit of catching up to do in the beginning), means that I’ve only just finished the darn thing a few weeks ago. It had been a delightful constant in my life through most of the year just past, and I placed it on the bookshelf after having read the December 31st entry with not a little sadness. I’m going to miss our daily visits.
I’m thinking you’ve probably spotted this thing at a bookstore at some point. It was released a few years ago, although you may be able to find it at a severely discounted price if you hunt around a bit. I got mine from the bargain section of a Barnes and Noble. It’s a thick book, printed in what I think they call the “landscape” format favored by some comic strip reprint series, like the Complete Peanuts. The book contains a series of 365 double page spreads. On each right-hand page, artwork from a golden age DC comic book appears (or artwork from comic book companies since purchased by DC), and on the left-hand page, Les Daniels offers brief commentary on and context for the image. Sometimes the art depicts an entire page, sometimes an extreme close-up on a detail from a single panel. Covers, advertisements, anything printed in those old comics is up for grabs, lovingly presented by Kidd and Spears to create a unique view of a vitally creative period in comics’ history.
Occasionally, the camp aspects of the material is highlighted with tongue planted firmly in cheek, such as an entry featuring the absurd Ace, the Bat-Hound, or an advertisement featuring a toy Superman Ray-Gun. More often, though, the selections highlight the skills of the various golden age artists, such as Mac Raboy and his work on Captain Marvel Jr., or Jack Burnley’s work on Starman. The book features copious information on myriad superheroes, both famous and forgotten, but it also contains many entries on other genres popular at the time, such as romance, crime, western, science fiction, and funny animal comics. While Daniel’s comments are too brief and the examples too idiosyncratic to provide a definitive history of comics’ so-called golden age, the book, as a whole, nevertheless evokes what it may have felt like to have been a comics enthusiast at the time of the material’s original publication.
I greatly enjoyed spending time with this book, and urge anyone interested in high quality art books, or old comic books, to seek it out and enjoy it slowly, as I did, day by day.