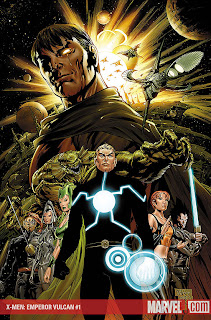 The new X-Men mini-series that debuted this week picks up where Ed Brubaker and Salvador Larrocca's epic Uncanny X-Men storyarc, The Rise and Fall of the Shi'ar Empire, left off. I admittedly grew a little bored of The Rise and Fall of the Shi'ar Empire story and abandoned ship about halfway through the story. Apparently some interesting events unfolded for those who stayed with the book, leaving the Shi'ar empire in a state of disarray. Basically, the X-Men lost. Vulcan married Deathbird and became emperor of the Shi'ar, overthrowing Lilandra, eliminating D'Ken, and murdering his own father, Corsair of the Starjammers. Some very bold choices. Following these events, Ed Brubaker separated the team. Half of them went back to earth, and continued in Uncanny X-Men proper (Warpath, Professor Xavier, Hepzibah, etc.), while the other half's story is about to unfold here in this mini-series. Havok has taken over as leader of the Starjammers, and together with Polaris, Marvel Girl, Ch'od, Raza, Lilandra and the Shi'ar Korvus, they have created a Resistance which much of the Shi'ar has defected to since Vulcan's ascent to the throne hasn't gone over very well. They wish to return Lilandra to her rightful place as Empress of the Shi'ar, and get revenge on Vulcan for his treachery. However, Vulcan is still quite the threat with the Imperial Guard and most of the Shi'ar on his side. It's a very epic story with spaceship fights and other alien races involved, and it's not too overwhelming, provided that you know the characters and can handle the back story. It's only five issues long, so I'm not expecting much in the way of great characterization, but the art is decent and it's a fun superhero book so far. A worthy successor to Ed Brubaker and Salvador Larrocca's arc on the Shi'ar, that kind of makes me wish I'd stuck it out a little further into their run. B