September 10, 2007
This week, a review of the madness that is MPD Psycho and I'm finally getting to more To Terra, just in time for me to pick up the first volume of the creator's US debut of Andromeda Stories (look for the review of that book next week). 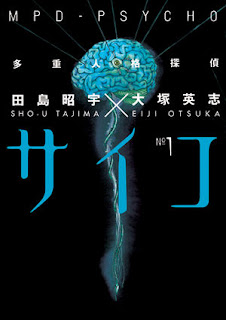 The infamously gory manga MPD Psycho, from Dark Horse, is a delightful indulgence. In wake of the "torture-porn" trend in film, this doesn't seem quite as shocking as it perhaps would have five years ago, but the creators are certainly trying to do Hostel one better, with some hard scenes to watch unfold. Add a dash of CSI, stir in Profiler, and mix it all with Death Note, and you get MPD Psycho. MPD stands for Multiple Personality Detective, which sums up our protagonist in a nutshell. Yosuke Kobayashi, or Kazuhiko Amamiya, or whatever he calls himself, is a famous profiler who tries to get into the head of serial killers and draw conclusions about them and their lifestyles. When a serial killer targets Kobayashi, something scary from within him surfaces that sends him to prison for a few years. After his release, his reputation tarnished, Kobayashi accepts an offer to join an independent criminal research lab with the beautiful Machi Isono, to carry on his work. Needless to say, the serial killers in this book are brutal and they do some really gory, messed up stuff. But it's beautiful stuff. Like a car crash, it's hard to look away from the horror contained in this title. That, and the stunning artwork doesn't hurt. I can't imagine things getting much more over-the-top that what I've witnessed so far, but I'm sure the creators have more up their sleeves, whether we want to see it or not. A

After settling on the abandoned planet Naska, the telepathic Mu race hide out from the humans, who wish for nothing more than to wipe them out. The Mu, content on their new homeworld, argue over their best course of action, whether they want to follow their former dreams of returning home, to Terra, or give up their dream and be content with what they now have. Unfortunately, human elite Keith Anyan is sent to investigate strange goings-on near Naska, and is on a personal mission to destroy the Mu, who are closer than ever to discovery. This volume focuses a lot more on the major players of the series and introduces a few new players to the game leading toward the conclusion with the third volume. It seems like there's a lot left to resolve before the series is over, but I trust in Takemiya's storytelling abilities, and there's certainly enough in this particular installment to keep things entertaining. B+