September 18, 2007
It seems to be another week of slim pickings, but there are a few gems coming out to comic shops tomorrow. Here are our choices for where to invest your money this time around... 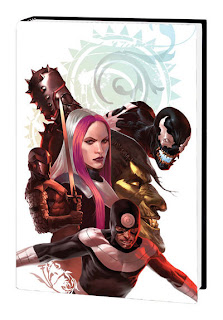 Thunderbolts by Ellis (Volume 1): Faith In Monsters Premiere HC - The Thunderbolts, relaunched following the events of Civil War, is a great concept. Put into the hands of Warren Ellis and Mike Deodato, it's one of the best superhero comics currently coming out. It's a fun, thrilling read starring a cast of some of the best supervillains from the Marvel Universe led by Norman the Green Goblin himself. This collection is a little misleading, as it's not just the Warren Ellis/Mike Deodato stuff collected...it's also some chapters from Civil War that led up to how the Thunderbolts came to be in their current situation. But that could be good stuff too. Think of it as a bonus on top of the awesome Ellis/Deodato story.