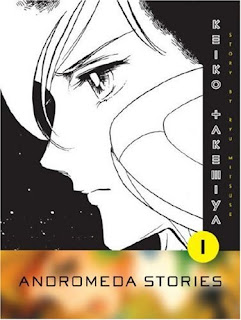 As much as I liked Keiko Takemiya's outer space adventure To Terra, I am really, really loving the beginning of her new manga series from Vertical, Andromeda Stories. This new series, co-written by science fiction writer Ryu Mitsuse, begins as epic as can be, with the creation of the universe. From there, we are introduced to Princess Lilia of the kingdom Ayodoya, who is about to marry Prince Ithaca of Cosmoralia, leaving her much-beloved brother behind to live with her new husband and the man who is about to be crowned king. The world has an old world fantasy feel, with all sorts of fun creatures and people riding dinosaurs, but before long, science fiction elements get thrown into the mix as well, as the peaceful kingdom is invaded from outer space shortly after the wedding ceremony. A mysterious swordswoman seems to be the sole person who understands what is going on, as she is from a different world herself, and comes to the aid of a group of people that include a gladiator and a psychic child, as the top officials of Cosmoralia are replaced by the invaders. Full of great characters and top-notch action, this is one of the most compelling manga that I've read in awhile. I really did not want to put this book down, as events went from one intriguing moment to the next. I can see how some people would have been put off by some elements of To Terra, but Takemiya has really hit her stride here. Unlike the sparse drawings of her earlier work, Takemiya's Andromeda Stories has lush backgrounds and a focus that wasn't quite there with To Terra. All of the elements of a great story are present here and Takemiya masterfully commands them in what may be the best manga I've read all year. A+