September 09, 2007
Below is a list of comics that don’t exist, but that I wish did….primarily reprint projects and translation efforts I’d love to see happen someday soon. We’re living in a kind of golden age as far as such projects go, particularly with the embarrassment of riches that is the many high quality classic comic strip reprint projects, and with the major mainstream publishers keeping more of their older material in print than ever before. Still, I’m a greedy bastard and I want more. Publishers, take note…
1. Multi-Force - Mat Brinkman’s fantasy comic strip appeared in the now defunct Paper Rodeo, a delightfully bizarre publication showcasing work from the great Fort Thunder cartoonists. I’d love to see an ambitious and forward-thinking publisher, like Dan Nadel’s Picturebox, take up the challenge of packaging this engaging, highly imaginative strip.
2. The Best of Captain Marvel - DC’s “Archive” books make for attractive packages, but they’re too damned expensive. I understand the cost of reprinting such old comics may make a cheaper, paperback “complete” reprint project impossible, but I’d love to see a best of collection, in the format of the recent The Best of the Spirit paperback, featuring some of the Big Red Cheese’s finest adventures. 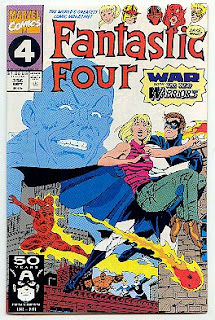 3. Fantastic Four Visionaries: Tom DeFalco and Paul Ryan - For five years, in Fantastic Four #356-414, writer Tom DeFalco and artist Paul Ryan had an unbroken run on Marvel’s First Family which, while certainly not in the same class as Jack Kirby’s or even John Byrne’s runs on the book, was nevertheless an entertaining superhero soap opera, featuring a lot of fun new characters and startling developments, such as the revelation of Alicia Masters’ having been a Skrull for years, and the “death” of Reed Richards. It all may sound a bit hokey now, and I guess it was then, too, but that’s part of what gave this run of issues it’s charm in an era of multiple variant covers, “hot” artists, and darker, sleeker comic books desperately grabbing for an aging and increasingly jaded audience. If nothing else, these books were a lot of fun, and deserve to not be forgotten.
4. Naoki Urasawa’s Pluto - If I’m not mistaken, Viz has plans to publish Urasawa’s 20th Century Boys once the currently serialized Monster is complete, but Pluto is the work I’m really hoping to see from Japan’s master of suspense. Pluto is basically “Ultimate Astro Boy,” as Urasawa re-imagines a classic Tezuka story as a sprawling science fiction epic. I read a few chapters online, and they are some of the coolest comics of any type I’ve ever read. The book has received great acclaim in Japan, and I hope American audiences get the chance to experience it as well.
5. Anything by Moto Hagio - With publishers like Vertical making great strides in the translation of historically significant Japanese comics, I’m really hoping it’s only a matter of time before we see some material from this important Shojo pioneer.

6. Fourteen - I’ve been dying to read this manga about a half-man, half-chicken named Chicken George, who springs to life from a lump of chicken fat to take revenge on humanity for our mistreatment of animals, for years. The creator of this bizarre sounding book is none other than Kazuo Umezo, of Drifting Classroom fame, and I think Fourteen would be a terrific follow up to that wonderfully warped series.
7. The Complete Polly and Her Pals - I literally feel guilty wanting more comic strip reprints given the wealth of material currently available, but I’ve always wanted to read more of this strip by Cliff Sterrett.
8. Book Collecting Non-Marvel/DC Golden Age Comics - Obviously it would need a better title, but wouldn’t a book collecting forgotten golden age comics from long defunct publishers be terrific? Multiple genres should be represented, but weird, forgotten superheroes should be prominently featured. Maybe the recent Fletcher Hanks book will kindle interest in this sort of thing?
9. Lost in Translation - Not a comic, but a book collecting Bill Randall’s column from The Comics Journal. Randall is a terrific writer and has exceptional taste in the sort of manga that’s not often published in the U.S. Often, he will mention artists years before their work is finally translated for American audiences, like Kazuo Umezu and Iou Kuroda. 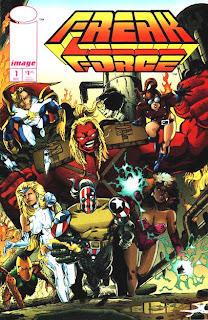 10. Freak Force Omnibus - Now that Erik Larsen has embraced the thick, cheap, black and white format of comics reprints popularized by Marvel’s “Essentials” line for his Savage Dragon, the time is right for a companion volume collecting, complete in one book, the entire eighteen issues of the spin-off series Freak Force, a great superhero comic co-written by Larsen and Keith Giffen, with art by Vic Bridges. There was a time when this was my favorite monthly comic book, and, like the DeFalco/Ryan Fantastic Four, it deserves rescue from obscurity.

What other fantasy comics projects would people like to see? Post your choices in the comments, or at your own blog, and I’ll link to them in a future entry.

Doug Smith said…
What ever happened to Vic Bridges? Is he still out there? I loved his early stuff but lost track as I checked out of comic reading from 1997-2003.
8:31 PM

Peggy Burns said…
D+Q has been trying to get Mat to publish MULTIFORCE for a few years now. Much of the original art was lost and Mat is just fine with the newsprint version. I'm still trying though.
7:08 AM

pryde4747@yahoo.com said…
I heard that Vic Bridges left comics to work at Disney, where I presume he still is?
1:21 PM