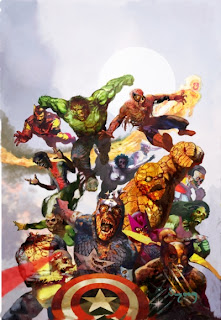 I finally got a chance to read the ultra-popular mini-series Marvel Zombies. Written by the mind behind the popular-in-its-own-right zombie comic The Walking Dead, and drawn by superstar Sean Phillips, this concept comes from an idea spawned in Ultimate Fantastic Four, and proved to be a real force to be reckoned with, going through several print runs in floppy format and well into its fifth printing in the hardcover collected edition. It’s a clever title, as most people immersed in comics are aware, that fans devoted to the company are often referred to as Marvel Zombies, and given the popularity of zombies in comics as of late, it seemed a natural fit, and one that fans were ravenous for. No pun intended. So, the concept: an alternate Earth is overridden by zombies, the superheroes of which are also infected and are the last survivors. They scurry to find new food on a dead world, where it seems only Magneto’s Acolytes have found safe refuge aboard Asteroid M in the planet’s orbit. But that all changes when the Silver Surfer comes along, proclaiming the world must be sacrificed for his master, the world-devouring Galactus. I’ll admit, this book is fun. The superheroes Captain America, Spider-Man, Wolverine, Luke Cage, Hulk and on and on, still work as a team, like the Avengers, but they’re more prone to backstab one another and steal each other’s food after working together to acquire it. It’s a twisted version of the team, but it makes for an interesting dynamic that often delves into the silly as illustrated by the scene where supervillain zombies are battling Galactus and one Avenger says to another “More like who invited them to dinner?” spoofing the “Guess Who’s Coming to Dinner?” tagline. It’s a mix of moments like that and pretty disturbing scenes like from out of the cannibal antics of Cormac McCarthy’s The Road. Everything is done very over-the-top. There are some pretty creative things that occur by the mini-series’ conclusion, but ultimately, this isn’t something worth getting too excited about. It’s a fun little lunch hour read, but nothing to warrant the attention its garnered. C+