More of a good thing 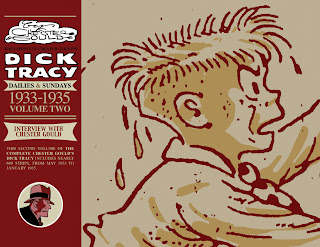 The second installment of IDW’s archival project of collecting the entire run of Chester Gould’s Dick Tracy is a lot of fun. It’s more fun than the first volume, though we still have yet to see manifestations of those things that Dick Tracy is known for: sci-fi devices and distinct bad guys with hammerheads and hair instead of faces and whatnot. But these early works are still definitely worth checking out, and you can sort of see things head slowly in that direction, with villains beginning to appear a little more distinct. Doc “Hump,” for example, is a mad scientist and underground doctor with not only a hunchback, but a huge lump on the top of his head, that makes for a really creepy antagonist. There are several recurring villains from the previous volume of the famous action/adventure strip, such as Steve the Tramp and Larceny Lu, and supporting members of Tracy’s home life like Tess Trueheart and Junior, with plenty of new characters and interesting stories to play the detective off of. Things are much more thrilling this time around, with some really intriguing mysteries and plotlines. Even when I knew where one mystery was headed a dozen strips before the concluding chapter of the arc, I was still on the edge of my seat to see how the particular events played out. It gets addictive. There are times when it gets a little cheesy, I’ll admit. Particularly when Gould has a strip that illustrates how real-life detective work has led to the capture of a certain criminal or turned up a clue, obviously showing off research that Gould himself had done into the matter, with little blurbs telling “the kids at home” to watch how this real detective stuff is done. It’s still fun though. And it is interesting. One story seems to consistently lead into a more exciting one, and I honestly can’t wait for the next volume to come out. A