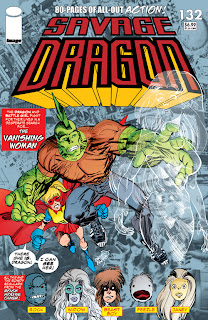 Savage Dragon #132 - It’s been a hell of a long time since the last issue of Erik Larsen’s superhero saga was released. Unfortunately, this series has become one I no longer anticipate every month so much as I’m just really happy when it does happen to show up. This particular issue is eighty pages long, with a lead story by Larsen and a backup story featuring members of the supporting cast written by Larsen and drawn by Frank Fosco. I’m not sure how many of those eighty pages are allotted to each feature, or if there may be more material besides.

There was a time I considered Savage Dragon the “ultimate comic book.” My knowledge of and taste in comics has grown considerably since then, to the point I now consider it the “ultimate superhero comic book.” I’ve been reading since issue one and have no plans on stopping now.

The Killer (Volume 1) HC - The acclaimed ten issue mini-series from Archaia Studios Press, written by Matz with art by Luc Jacamon, is a story about a professional assassin. The first part of the story is finally being collected, into a nice hardcover edition. I only read the first issue of the series (since it's hard to find Archaia Studios Press books where I live if it doesn't feature a cute little mouse on the cover), but I'm itching to get my hands on more. And nowadays, I'm more prone to buy the collected editions anyhow.