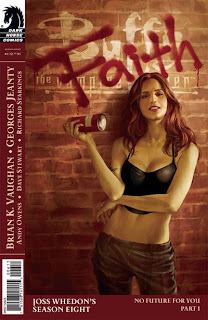 Brian K. Vaughan is the first writer to work on this series, following creator Joss Whedon, and he does a very nice job here, in the first part of the “No Future For You” storyline, featuring the Season Eight debut of Faith, a kind of rogue slayer played by Eliza Dushku on the television series. As you might expect, this first chapter is primarily setup. Faith has been operating out of Cleveland, where fans of the show may remember a Hellmouth is supposed to be located. It is suggested that Faith’s role in the slayer army is to tackle the more disagreeable tasks others may not have the stomach for. We see her reluctantly slaughter a group of child vampires in a disturbing sequence, for example. Afterwards, Faith returns home to a rundown looking apartment, similar to the one she occupied during season three of the show, where she finds Giles waiting. He presents her both with an important mission, and a way out of the miserable life she has found herself in. Intelligence has been gathered which suggests a neophyte slayer has turned to the dark side, and is being manipulated by the mysterious Twilight organization to somehow bring about the apocalypse.
Yes, it’s the end of the world once again, but this time, if Faith succeeds, she earns safe passage out of the country, and a “generous, annual stipend” with which she will be allowed to live as she pleases for the rest of her days, free of the consequences of the sins of her past, and the moral compromises her current position in the group requires. Faith accepts the mission, and her training begins, but not the sort of training Faith is used to. The evil slayer in question, one Lady Genevieve, is an aristocratic young woman living in England, and Faith is to covertly infiltrate Genevieve’s fancy dress party held in commemoration of her nineteenth birthday. Much discussion of etiquette and salad forks ensues, and the issue culminates with a large panel of a gorgeous looking Faith in her ball gown, and Giles’s perfect reaction to same. To be continued.
While this “fish out of water” scenario may be a bit hokey, the quality of Vaughan’s writing here, particularly his perfect characterization of Faith, gives me confidence he’ll be able to deliver an exciting and interesting story in the coming issues. The tone of the show and the voices of the characters are perfectly captured here, even more so than in Joss Whedon’s initial arc, oddly enough. I think one of the reasons for this is that this issue was “quieter,” without any large, epic battle sequences of the type Whedon has so enthusiastically embraced in this comic book incarnation of his universe. There’s nothing in this issue that could not have been pulled off on the television show’s budget, and indeed this story was originally pitched as a Faith television movie. I expect this will change in the coming issues, as it should. I think allowing the characters from the show to operate on a broader, comic book canvas is an entirely appropriate choice, as there is no reason not to take advantage of the limitless “special effects” budget offered by the medium, and to do otherwise would turn this project into another of many watered down, comic book adaptations of television shows of the type I usually have zero interest in. The Buffy comic book needs to become it’s own thing, and I think that it gets closer to becoming that with every issue, as the larger story arc develops, and as regular series artist Georges Jeanty becomes more comfortable depicting these characters and their world, striving for that balance between fidelity to the source material and the development of his own style. He does nice work here, depicting, with the aid of inker Andy Owens and always impressive colorist Dave Stewart, Faith’s world as a very dark place, both figuratively and literally. The second page, depicting Faith sitting smoking atop a tall building, is particularly effective in establishing mood and atmosphere.
Vaughan also nails Giles’s character here, and draws some interesting connections between him and Faith which are entirely appropriate given the back stories of the characters, but was something the show never really explored. I should mention that Buffy herself does appear in this issue, in a brief interlude which forwards one of the series’ mysterious subplots.
While it’s early enough in the game for this arc to take a completely wrong turn, the strength of this initial chapter makes that unlikely. I enjoyed this issue and am looking forward to more. And no, I’m not going to refer to this issue as “five by five,” because that’s just too obvious, although it was that good.