September 17, 2007
I didn't get around to reading the first volume of Keiko Takemiya's Andromeda Stories for this week's Manga Monday, so look for that next week. I did finish Takemiya's To Terra however, plus some extra goodies. 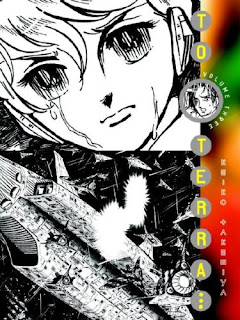 Keiko Takemiya's space epic To Terra comes to a bang of a conclusion with this final volume, as members' elite Keith Anyan confronts the leader of the psychic Mu race over the fate of the two races and the planet Terra itself. I really enjoyed Takemiya's art through this series. It was a great choice to have this boys' sci-fi space story complete with a more shojo look, since much of the story is centered around the emotions of the characters and there's so much about loyalty and love and struggling to come to terms with your emotions...the types of themes you'd see when picking up a typical shojo book, but grafted onto the setting of this huge worlds vs. worlds battle with spacecrafts shooting one another down and assassination attempts and machines controlling society. A thrilling, emotional read like no other. A

The latest Mushishi continues to follow Ginko on his travels helping people whose lives are touched by mysterious mushi. In this book, a few short stories show Ginko drift into people's lives, attempting to drive out the little magical creatures, dispelling local folklore and saving other mushishi. There aren't too many happy endings in this volume, as the mushi tend to destroy everything they touch. We do get a few glimpses into Ginko's solitary life here, which is a nice treat, and sheds a little light on his strange ways. A-

The latest issue of Shojo Beat comes complete with a new series debut and a preview. And while I'm not a hug fan of Vampire Knight and Crimson Hero, and my interest in Absolute Boyfriend has waned, I have to say that the last two additions to the book before this volume are shaping up to be really strong. I'd heard a lot about Honey & Clover previous to its debut here, but the real surprise for me was Sand Chronicles, which I have to say that I like the most of the current offerings. The great cast of characters have really interesting histories and the situations creator Hinako Ashihara throws them into always lead to some really tender moments.

Haruka: Beyond the Stream of Time
Tohko Mizuno

Baby & Me saw its final chapter in the magazine to make way for Haruka: Beyond the Stream of Time, a series based on a video game that draws comparisons to Fushigi Yugi: The Mysterious Play. The story follows a young high school student, Akane, who one day finds herself drawn back to the Heian period of Ancient Japan, and is ordained the Priestess of the Dragon God. With scary powers that she can't control and too many strange people around her to make sense of things, Akane tries to find her friends that were drawn to the same world as her, and come to terms with her newly inherited position. Honestly, I think that this is the weakest book to ever grace the pages of this magazine. It's impossible to follow what's going on: things happen too quickly and the panel arrangements don't give you any sense of what's happening or where the characters are. The only saving grace is that the dialogue fills in a lot of the gaps, so you're not completely lost. But it's not really fun to read the comic when I have to constantly read about what the action is supposed to be conveying. It would be something else if the plot was somewhat original, but since I feel like I've already read this story, there's nothing here to hold my interest whatsoever. F

S*A was previewed in Shojo Beat this month, with the first volume set to hit stores in December. S*A is short for Special A, a group consisting of the top eight students at a prestigious university. The main character is Hikari Hanazono, a tomboy whose only goal in life seems to be beating the student who currently holds the first place slot in the school, Kei Takishima, who she deems arrogant (and who always seems to do things a little better than her). The two characters have a cute relationship, where Kei taunts Hikari a little bit, referring to her as "Number Two," but also admires her constant hard work, especially since things come so easy for him. Hikari...well, she's just kind of a hot-head. And while it's obvious from the get-go where their relationship is headed, it's still fun to see the students interact and goof off with one another. It's a little His & Her Circumstances-ish in its conception, but unlike Haruka: Beyond the Stream of Time with its generic protagonists and sloppy action, the characters and the way things unfold in S*A have a feel all their own, so I can forgive the similarities upfront, and enjoy the goings-on of the students. C