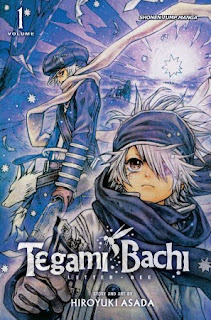 Tegami Bachi: Letter Bee is a shonen manga that takes place in a fantasy world where the lands are lit by a manmade star, and the classes are separated into three lands, like rings, with water between them, the outer ring receiving the least amount of light and reserved for the lowest class.  The land is very dangerous to travel in outside of villages, particularly where little light is found, as there are vicious monsters prowling about in the form of huge armored bugs, ready to attack any stray travelers.  This danger is what makes Letter Bees necessary.  Letter Bees are basically delivery men.  They vow to deliver any package to its destination, no questions asked, carrying the "hearts" of the senders with them or something to that effect.  And heart plays a big role in the story, as it's the heart that activates Spirit Amber, which are little bugs caught in amber that radiate light and focus heart into some sort of energy weapon.  Or something.  It gets a little confusing and hard to follow to be honest, passed that initial set-up of the world.  This whole book is a little muddled, to be honest.  I love the very basic set-up of it all: a world so dangerous that these warrior messengers risk their lives to deliver messages across the land, battling monstrous insects along the way.  But when things get technical, explaining the "heart" and how energy works and what amber does as a weapon, how you have to strike the bugs between their joints or something - it's all a little much.  It's tedious and tries my patience and ultimately, my interest wanes quickly.  For a book full of action, events are also really hard to follow.  The panels are too busy and often I can't tell what I'm looking at when there's a fight with a monster, making the action even less exciting than the technical babble at times.  When things slow down and there's something like a conversation between characters or a memory, it gets better.  There's focus and the illustrations can look very nice.  But overall, I think this book goes for too much flash, to its detriment.  I like the ideas in the book, the world itself, and how the main character gets introduced as a bratty kid who himself is being "mailed" following his mother's abduction, and how he views his journey with the Letter Bee who delivers him to his aunt as his inspiration to be a Letter Bee himself.  It's all very nice until you get to the execution, and without proper execution, readers are left to make sense of the pieces if they have the patience, and I lost my enthusiasm for this title pretty early on.