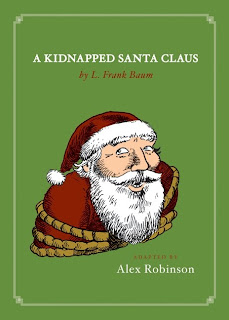 L. Frank Baum is most known as the beloved creator of the Oz children's books, but he also penned the fun short story A Kidnapped Santa Claus as well.  Publisher HarperCollins included this story as one of three books they were having adapted into graphic novels by some pretty exciting creators.  The other two titles in this venture are The Fir Tree by Hans Christian Anderson, adapted by Lilli Carre (The Lagoon), and O. Henry's Gift of the Magi, illustrated by Joel Priddy (The Preposterous Adventures of IronHide Tom).  The most appealing of the three projects to me was the adaptation of L. Frank Baum's work because I am a fan of the Oz books.  Alex Robinson (Box Office Poison) illustrates the story with ease, giving the fantasy a new life as he maneuvers Santa and his fairies and other creatures through the festive environment of Laughing Valley.  The story is about a group of daemons who plan to ruin Christmas and prevent Santa from delivering presents to the children of the world so that greed, hatred, selfishness and repetance will overwhelm them and send them to the caves of the appropriate daemon.  A small group of his friends, headed by the fairy Wisk, deliver the presents themselves before returning to save Santa.  Robinson used creative license to adapt this pretty threadbare story to a graphic novel.  Wisk and her friends played a much smaller role in the actual story by Baum, but to give the story a cohesive thread that lends itself much better to the form of the graphic novel, he made Wisk a prominent figure throughout the story, with a real personality of her own.  Robinsons's touches really add a new dimension to the book that I think improves the story overall, coloring in how certain aspects of the story went down, and adding nice touches here and there to make the adventure more thrilling and fully-realized.  You can read the original short story by Baum here, but to get a real treat of a story this holiday season, for all ages, check out this beautifully-rendered graphic novel.  It's a magical story that I think rivals many of the great holiday tales out there, and would be a welcome addition to any stocking hanging over a fireplace this Christmas.