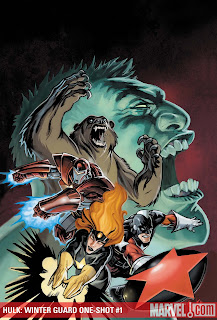 Winter Guard is a team of superheroes from Russia consisting of Red Guardian, Ursa Major, Crimson Dynamo and Darkstar.  This one-shot establishes the modern-day incarnation of the team, courtesy of David Gallaher and Steve Ellis, while a flashback to Incredible Hulk showing a past version of the team, from Peter David's run, with art by Dale Keown.  I wasn't a big fan of the content from Incredible Hulk #393, which was originally published in 1992.  It looks very dated when compared to the sleak cinematic storytelling of today's superhero comics, in particular when sandwiched in a comic book such as this one, between two shorts told in that modern style.  And perhaps it's just because I'm used to the modern style of superhero comics, but I preferred those shorts, which mostly focused on Darkstar, the superhero that Grant Morrison killed during his legendary run on New X-Men.  The Darkstar appearing in this one-shot is a different person, Sasha Roerich, who has taken on the name of Darkstar on the Winter Guard, a team that rotates out each position when one of them dies.  The current Crimson Dynamo, for example, is killed in the first chapter and promptly replaced by the time the press conference rolls around, to keep up appearances that everything is normal and that they are reliable, god-like heroes who watch over Russia.  This sort of thing has been done before, most notably in X-Statix, but I do like the idea of the specific mantle being passed on to a new person each time.  Kind of neat.  I also like how Gallaher plays with the stone that charges Darkstar's energy, and how the new bearer can feel the predecessor inside herself.  It's a neat element to play with to give that character some depth.  For some reason, I'm really drawn to these superhero teams that protect any given country.  Like Alpha Flight.  It's just kind of cool knowing that if Marvel characters travel to Russia, they're in these guys' jurisdiction.  Anyways, Hulk: Winter Guard doesn't offer anything really new, but it's a fun little superhero read, and I look forward to future appearances by this team throughout the Marvel U, perhaps even in another book of their own.